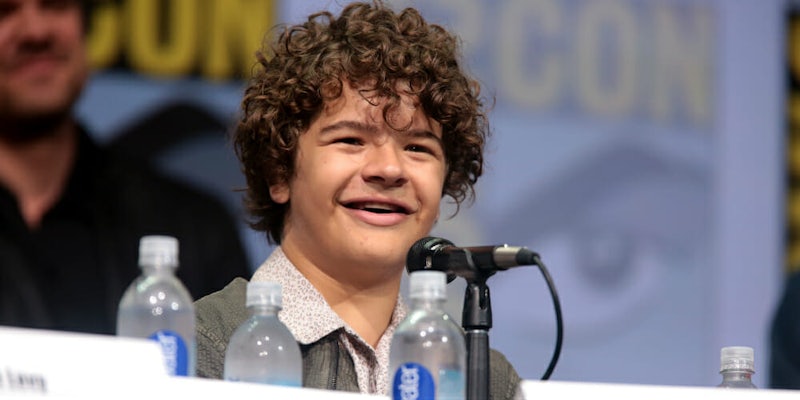 It's about pranking people who are looking for work.

Gaten Matarazzo, who best known for playing Dustin on Stranger Things, is set to host and executive produce a hidden-camera prank show for Netflix. The show’s announcement has been met with backlash.

The show is called Prank Encounters. The concept of the show is based around an elaborate prank that will first give people, looking for work, jobs. The pranking begins once they start their part-time jobs. Ultimately, the individuals are yet again rendered jobless once the prank ends.

“Each episode of this terrifying and hilarious prank show takes two complete strangers who each think they’re starting their first day at a new job,” the Netflix press release for the show reads. “It’s business as usual until their paths collide and these part-time jobs turn into full-time nightmares.”

Netflix is calling the show “epic.” Yet, many people are finding the concept insensitive.

The 16-year-old tweeted about the show’s announcement on Friday. Matarazzo’s tweet was met with fans calling the show “cruel,” “mean-spirited,” and begging him not to go through with it.

Hey Gaten, this isn’t the group of people to be pulling “pranks” on. Please reconsider this one. Punch up, not down.

Is your next project going to be about pranking people who think a cure has been found for a terminal disease?

There are so many people involved in this show who should have known how cruel this idea was. Please re-think this, both for your career and…for your soul.

Gaten, you seem like a cool kid, but please don't. As someone who is currently unemployed, this just comes across as unnecessarily cruel.

What the actual fuck @netflix? Way to punch down on people already having a hard time. What's next, pranks on the homeless? https://t.co/bmcGg7wD6v

Hey @netflix great job. I struggled to find work for a year and it drove me to the brink.

#PrankEncounters @netflix thinks this is a great idea for a TV show. Hire someone thinking they have found a job and then prank them with the fact they really don't have a job. NO creativity at all and down right cruel.

Inspired by Gaten Matarazzo’s new prank show, I’m pleased to announce that I too will be hosting a prank show on Netflix titled Kicking Puppies. I don’t want to spoil the premise but I’m sure it will go over great.

exciting news: the stranger things kids are getting old enough to be genuinely hateable https://t.co/FVU9il2wvT

The other individuals serving as the show’s executive producers are Ben Silverman, Howard T. Owens, Rob Hyde, and Kevin Healey for Propagate. The director will be Anthony Gonzalez, who is best known for his work on Dance Moms and Undercover Boss, another hidden-camera show.

Prank Encounters is set to have eight episodes in the first season, which is slated to roll out at the end of 2019.

Yet, I’m not sure how many viewers will be binging it. The consensus seems to be that it’s probably best sticking to pranking people who have job security or men who send unsolicited “dick pics.”

Hey Netflix, I’ve a prank show for you: we find the worst investor bros and toxic hedge funds and prank then into thinking they’re about to invest in some blood sucking miracle investment then reveal we’re gonna use the money to pay for thousands of people’s medical procedures.

Women agreeing to meet up with the guys that send them unsolicited dick pics, but when the guy arrives, its actually their mother waiting for them.

The Daily Dot has reached out to Netflix.