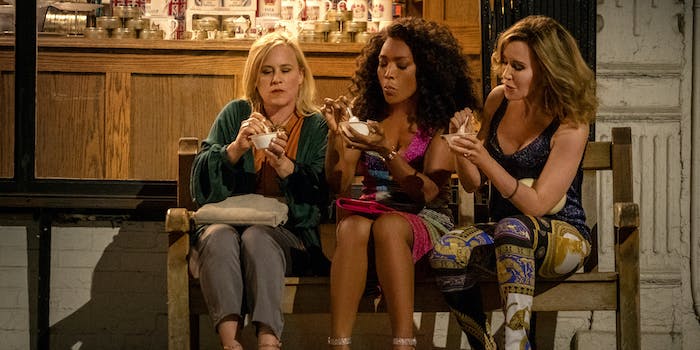 Less than 15 minutes into Cindy Chupack’s maternal lament/affirmation Otherhood, one of the characters secures their place in a future Titular Lines tweet. That clunkiness is part and parcel of Otherhood, a film that is more of a guilt trip than Guilt Trip. In its best moments, Otherhood finds truths in the eternally complex relationship between parents and children. The problem is that these moments are buried under a collection of cliches. For a movie full of characters searching for a purpose, Otherhood has all the verve of a corny Mother’s Day card. It aims for emotional resonance but delivers unearned sentimentality.

RELEASE DATE: 8/2/2019
DIRECTOR: Cindy Chupack
STREAMING: Netflix
After another lackluster Mother’s Day, three moms decide to surprise their adult sons and visit them for a week.

Otherhood stars Angela Bassett, Patricia Arquette, and Felicity Huffman as Carol, Gillian, and Helen, respectively—a trio of women struggling to define themselves beyond their roles as mothers. Lifelong friends and emotional support beams, these women want nothing more than to feel acknowledged and validated by their 30-something sons. But their sons don’t need them—or they’re at least too self-absorbed to know what they need. After a disappointing Mother’s Day, Carol, Gillian, and Helen leave their upper-middle-class homes and hit the road to spend some time with their sons in New York City.

Each woman’s relationship with her son is strained in some way. Carol’s son Matt (Sinqua Walls) works as an art director for a men’s interest magazine and is a happy bachelor. Gillian’s son Daniel (Jake Hoffman) is a struggling novelist whose girlfriend is cheating on him. Helen’s son Paul (Jake Lacy) never came out to his mother as gay. The film, directed by Chupack, with a script credited to Chupack and Mark Andrus, centers these storylines around the most hackneyed conflicts imaginable. Gillian just wants her son to date a nice Jewish girl. Oy vey. But that pales in comparison to the lunch scene where Helen keeps repeating “sperm donor,” or Carol’s drunken night of dancing at Matt’s work party. It’s all bad and, worst of all, not funny or insightful.

Eventually, the women come to realize their sons aren’t the only ones with communication issues. It gives the characters a chance for introspection, but Otherhood doesn’t spend enough time on this. Helen, Carol, and Gillian’s history at least feels believable, which is a credit to the chemistry between Bassett, Arquette, and Huffman, who also serve as producers here. But their sons, who have apparently known each other for decades, feel like casual acquaintances.

Otherhood saves its worst impulses and indulgences for its ending. I hesitate to call this a spoiler because it’s impossible to spoil something that’s already rotten, but here it goes. The script puts the characters through the motions of emotional epiphany, only to validate Carol, Gillian, and Helen’s worst impulses. The sons learn to think beyond themselves while the mothers learn to accept the things they can’t control—until the film ends with the sons doing the exact things their moms want them to do. This “validation” feels like pandering to the moms in the audience. Just like Carol buying herself flowers, it’s a self-serving gesture that fails to show any personal growth from the characters. Call it a mother-knows-best ending with a wink.

Just like parenthood, Otherhood is full of frustrations, but it offers few of the rewards. I haven’t read the source material for the film, William Sutcliffe’s Whatever Makes You Happy, but I can only hope the book makes more room for nuance. The pain, anger, and anxiety from the lead trio is palpable at times, but for the most part, Otherhood takes the path of least resistance rather than engaging at length with these negative feelings. It’s emotional cotton candy that dissipates before it can make a mark.

Otherhood was originally scheduled for a pre-Mother’s Day release, but Huffman’s involvement in the college admissions scandal necessitated a delay. Judging by the final product, it should have stayed on the shelf. If you want a movie about a woman grappling with a midlife crisis, you’re better off checking out Netflix’s Juanita. It’s similarly beset with cliches, but its execution makes it more palatable. Otherhood does a disservice to moms everywhere, who deserve better than this self-congratulatory trifle.