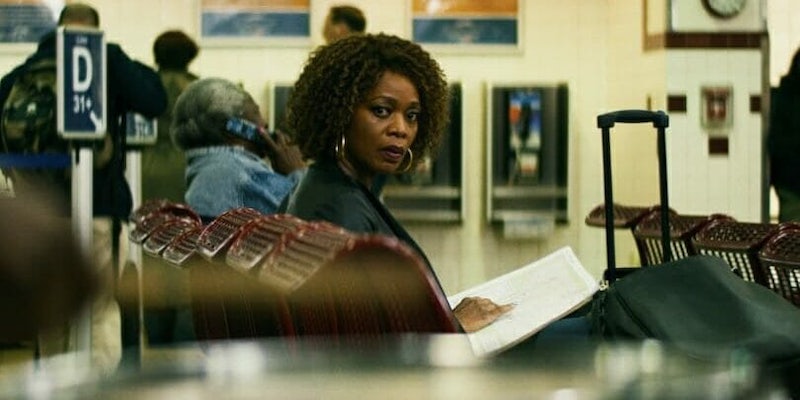 Netflix’s Juanita is a quiet, unassuming movie with simple storytelling and quaint ambitions. It’s a movie about a woman taking stock of her life and sorting out her desires. Alfre Woodard plays Juanita, a woman who’s put upon by life and her family, and hops on a bus to spend some time in the middle of Montana. Just like the film’s titular character, how rewarding you find Juanita depends on how much of yourself you put into it. For me, it’s a mixed bag.

RELEASE DATE: 3/8/2019
DIRECTOR: Clark Johnson
STREAMING: Netflix
Feeling trapped by life and unappreciated by her family, Juanita goes to the middle of nowhere to figure out what she wants from life.

Woodard’s performance is the strongest thing about Juanita, and the film wisely accentuates her work. You can see in the way Juanita moves that she’s carrying too much on her shoulders. Her husband isn’t in the picture, and her kids are a mess. Her son drifts in and out of the house and in and out of shady business on the street. Her 19-year-old daughter has a daughter of her own and a strong desire to keep going out. “I’ve stayed home the last two nights,” her daughter pleads before spinning around and out the door. Juanita’s only respite is her recurring fantasy of being seduced by Blair Underwood.

The movie’s poster features the irredeemably corny tagline “You can’t find yourself if you never get lost.” That also acts as the story’s guiding principle. So Juanita decides it’s time to reclaim her personhood and hops on a Greyhound. She ends up in the small, fictional town of Paper Moon, Montana. Her journey is smooth and free of interesting detours, until she takes a job cooking at a small diner. It gives Juanita a chance to establish herself, and the locals like her cooking. Woodard soaks in moments of peace along the way, and you can almost see the figurative weight easing off her shoulders. Not only can she act without considering the impact she has on others, but she also strikes up a new relationship with the diner’s owner and main cook, Jess (Adam Beach).

This is a conventional story told in a conventional manner, so Juanita finding a new man is expected. Still, it feels like a bit of a letdown. We want to see Juanita thrive on her own, but the film gives her little solo time. There is nothing particularly interesting or new about her romance with Jess, but Woodard and Beach have strong chemistry.

That kind of sums up Juanita, too. It’s a movie that sets out to accomplish a straightforward goal, and takes the path of least resistance to get there. Director Clark Johnson, best known for TV (including The Wire, The Shield, and a host of others), does a fine, if unremarkable, job visually. Juanita puts its fate in Woodard’s hands and she delivers. But a film as slight as Juanita doesn’t deserve more than a halfhearted recommendation.