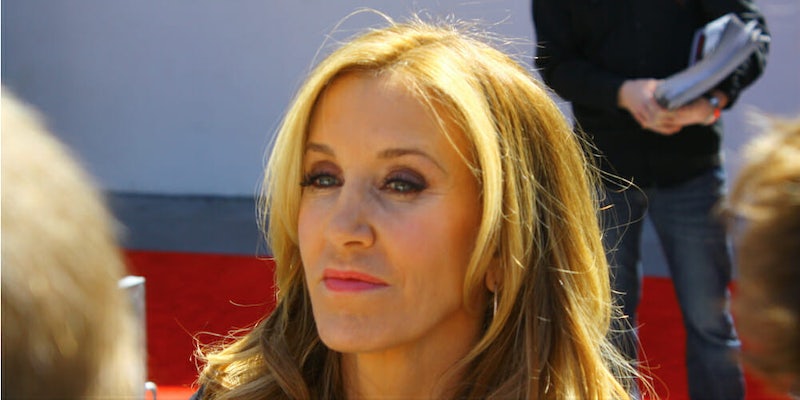 Netflix is distancing itself from Felicity Huffman.

The streaming giant just put the breaks on an upcoming, Huffman-helmed comedy called Otherhood. The move comes as no surprise following Huffman’s guilty plea on April 8. The 56-year-old actress was arrested in mid-March in connection to a massive college admissions scandal and pleaded guilty on Monday. Netflix’s decision to delay the release came days after Huffman’s guilty plea was entered.

Huffman joined 13 other wealthy parents in their attempts to bribe, cheat, and scam their way into college acceptances for their children. Huffman is accused of paying $15,000 to boost her eldest daughter’s SAT scores. She admitted her guilt in a statement. “I am in full acceptance of my guilt, and with deep regret and shame over what I have done, I accept full responsibility for my actions and will accept the consequences that stem from those actions,” Huffman said.

Netflix decided to quietly shift the release of Otherhood, an upcoming film starring Huffman. The film focuses on three mothers, played by Huffman, Patricia Arquette, and Angela Bassett, who move to New York unannounced to be closer to their adult children. The film was set to be released on April 26.

Netflix confirmed the film’s postponement with the Associated Press. The streaming service has not yet announced if the delay will be permanent. It is not Huffman’s only upcoming Netflix release, however. The actress has a supporting role in an upcoming limited series titled When They See Us. She plays prosecutor Linda Fairstein in the series, centered around the Central Park Five case. The series premiere date—May 31—has not changed.

Netflix did not return the Daily Dot’s request for comment.