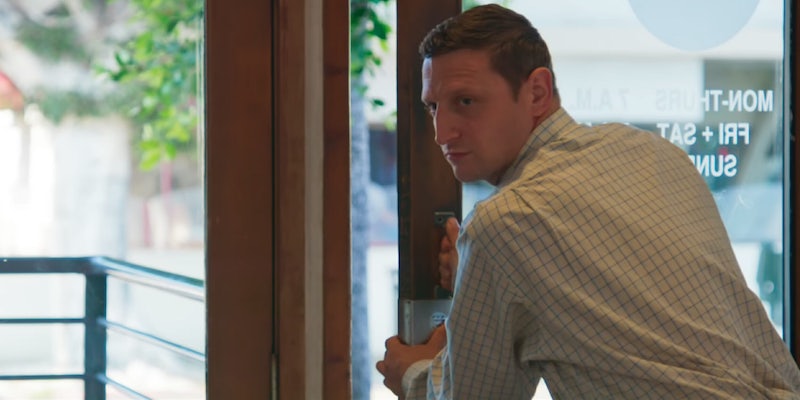 This weird, bite-sized show sometimes pushes when it should pull.

I Think You Should Leave with Tim Robinson shows the process in the first sketch: Robinson leaves a job interview in a cafe by pulling the door instead of pushing, as his potential employer observes. In his obstinance, he dramatically pulls the door from its hinges, sure that this is the way out of the bit.

I Think You Should Leave with Tim Robinson

SNL alumni Andy Samberg, Will Forte, and Vanessa Bayer appear, and Steven Yeun, Brandon Wardell, Kate Berlant, Cecily Strong, and Tim Heidecker flesh out the ensemble cast. Berlant steals the scene in a sketch about an intervention at a Garfield-themed house; Forte is perfectly menacing in a sketch about a man so vexed by a crying baby on a plane years ago that he stalked him into adulthood. These are the weird worlds created in the ITYSL-verse, but the show also takes care to show the folly of people trying to connect.

There’s been something of a pivot from ensemble-based sketch shows to ones that focus on an actor playing several characters: Arturo Castro’s new Comedy Central show; Mike Myers’ upcoming Netflix show; Chris Lilley’s new Netflix series Lunatics, which drew criticism for its depiction of a South African character. ITYSL centers around Robinson, but it benefits from the different voices and oddball characters mixing things up. Parts of ITYSL evoke the spirit of Tim and Eric Awesome Show, Great Job!, specifically a sketch about a car focus group that’s derailed by an odd old man.

That heightening sometimes leads to Robinson screaming, often about poop, neither of which necessarily add to the comedy. Robinson was in Netflix’s The Characters, a series that was good in concept but didn’t exactly feel cohesive. Here he’s better able to showcase his talent for playing straight and absurd, and yield the floor to others.

I Think You Should Leave has no interstitial component—Robinson doesn’t host the show, there’s no band to cut to—and the whole series wraps up in under 90 minutes. It’s the type of show that could potentially benefit from Netflix’s experiment with random episodes, even if a few stretches might prompt viewers to tune out. The show itself is an experiment in how sketch comedy can evolve on the platform.