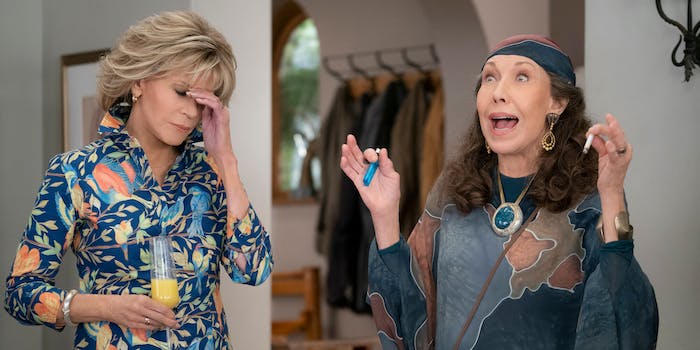 Though far from perfect, season 6 hits the same high notes as 'Grace and Frankie' at its best.

After a disappointing fifth season, Grace and Frankie is back in top form, with moments that hit the highs of earlier seasons.

RELEASE DATE: Jan. 15, 2020
CREATORS: Marta Kauffman and Howard J. Morris
STREAMING: Netflix
While a couple moments miss the mark, the rest of Grace and Frankie’s sixth season is well-paced and satisfying, with plenty of humor and emotional payoff.

In Grace and Frankie season 6, we pick up on the beach with our two leads after Grace broke the news about her Vegas wedding to Nick. Terrified that Grace only married Nick to get back at her, and by the changes the wedding means for them both, Frankie spends much of the first episode running around like a headless chicken as only Frankie can. However the plot resolves with the revelation that not only did Grace marry Nick because she wanted to, no regret-inducing revenge in sight, but it was thanks to Frankie and the love and care she’s always shown her that allowed Grace to trust in romantic love again. It’s a beautiful summation of their friendship and a fairly good consolation prize for those disappointed the two women didn’t end up together.

Season 6 goes on to tackle the growing pains of Grace and Nick’s marriage and the way they both struggle to adapt to what this marriage means for them. For Grace it’s learning to strike a balance between her time and relationships with Frankie and Nick, and how that has to change now she’s living with him as his wife. Nick on the other hand is struggling with what it means that Frankie really is the third person in their marriage: No matter how prepared he was for that going in, adapting to it in reality is another thing entirely. Additional drama is added by Nick’s issues with the truth, leading to regular consequences from the hilariously awkward to the downright disastrous, all in ways that ring entirely true for a very rich and consequentially amoral man.

At first, Robert and Sol seem to be doing better than before. Grace and Frankie season 6 is full of touching moments between them as they decide to finally go on a honeymoon, teach Sol how to swim and go on to battle serious health problems together. However things fall apart when Robert puts his love of theater ahead of his marriage, and rather than handle the matter like adults when the truth comes out, the two of them engage in an escalating battle of childish—and horrifyingly expensive—revenge. A frustrating feature of this show, not limited to this season, is its unwillingness to fully acknowledge or deal with how dysfunctional Robert and Sol’s relationship actually is. Things reach a point this season where marriage counseling or divorce are the only reasonable choices to make, yet the conflict just sort of fizzles out instead with no real attempt to tackle it or the underlying problems that caused it. It’s a strange contrast to Grace and Nick’s relationship, where the dysfunctional elements are actually addressed and, if not dealt with, then at least treated as something that needs to be resolved.

The sixth season focuses heavily on Grace and her own sense of identity, tackling how she feels about being the wife of a rich, younger man and her growing acceptance of the realities of her aging body. After being trapped by her arthritis in a humiliating way, and calling Frankie for help to keep Nick from finding out about it, Frankie comes up with yet another brilliant business idea—one Grace is utterly opposed to at first. The season follows her journey to a new level acceptance of the needs of her body as she slowly adapts and grows more comfortable with the idea of this new project, and with herself as an elderly woman. There’s also a story arc which finally addresses Grace’s obvious alcoholism and some of the consequences of it in a surprisingly sensitive way that, at the same time, gives up none of the show’s trademark humor or realism.

Other highlights include Robert and Sol’s shark-lawyer past coming back to bite them when Frankie brings home a new beau, Barry’s quest to inseminate his lesbian friends, and the journey his and Brianna’s relationship takes in the process and the two surprise twist endings that look to a very interesting set up for the next, and final season.

Though far from perfect, Grace and Frankie season 6 is one of the better seasons the show has to offer. While missing the mark a little with some of the Robert and Sol moments, the rest of the storylines are well-paced and satisfying, with plenty of humor and emotional payoff.