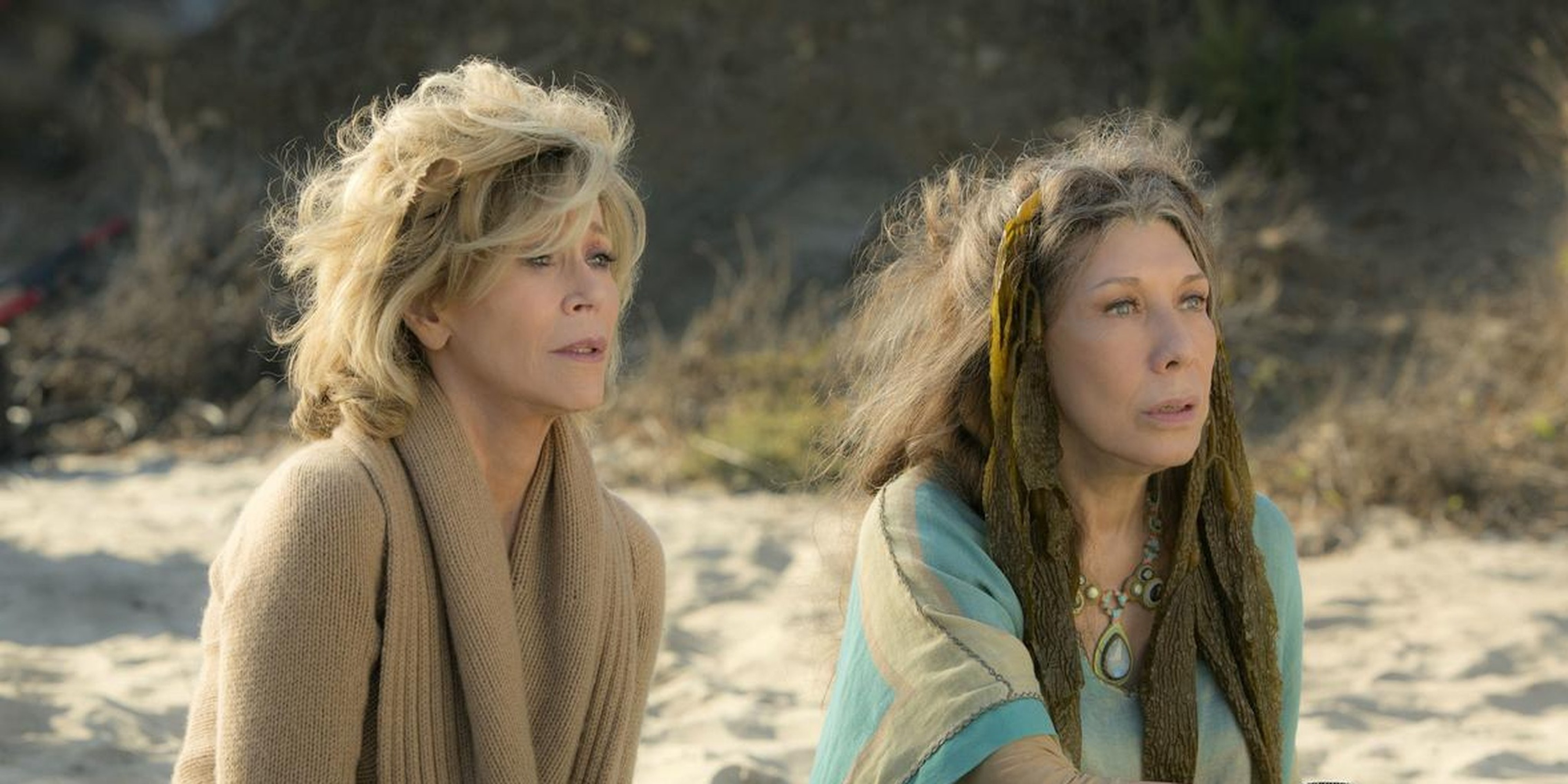 'Getting a shoutout from Miley Cyrus makes a huge difference.'

New Netflix original Grace and Frankie—in which Lily Tomlin and Jane Fonda play 70-something frenemies whose husbands (played by Sam Waterston and Martin Sheen, respectively) leave them for each other— explores twilight years thrown into chaos, and Tomlin and Fonda anchor the emotional heft of the show. Though it has some missteps, seeing the two onscreen together feels like a victory.

The show was co-created by Marta Kauffman, one of the creative forces behind Friends and Dream On. During a panel at the ATX Television Festival in Austin, Texas, Kauffman spoke about the creation of Grace and Frankie, dealing with misogyny from studio heads in the Friends days, and the question everyone needs to stop asking. (A reunion isn’t happening. Just stop.)

After the show debuted last month, Fonda made a comment about how she and Tomlin got paid the same as Waterston (Sol) and Sheen (Robert), who aren’t the show’s main stars. Last week, a fan petition started circulating to help fix the alleged income inequality issue, which no doubt got more eyes on the show. (The actresses later clarified it was a joke.)

While Tomlin’s hippie holdout Frankie and Fonda’s pinched, cashmere-clad Grace could not be more of a stereotypical odd couple, the actors give them a humanity and vulnerability. It’s a pretty smart move for Netflix: The show’s aimed at baby boomers but has picked up younger fans, like Miley Cyrus.

But some elements haven’t settled yet: The characters of Sol and Robert still seem too tentative, and their adult children are only partially fleshed out. There are some clumsy setups about broken hips and hearing loss. But perhaps that will unspool in season 2, which just got picked up by Netflix.

Kauffman spoke to the Daily Dot about how Netflix is trying to engage a different audience, the wage gap, and the reality of vaginal dryness.

So you mentioned that Jane and Lily were there from the start. How did it end up at Netflix?

When we pitched it, we pitched it everywhere, because everybody was interested in hearing it. And we already had a sense that it should be on some sort of non-standard network outlet, and it just seemed HBO… I love their stuff, but you can be in development hell there for a long time. My actors are in their 70s; I don’t want to wait two years. And Netflix, if they like your script, you go. And I’m so happy with our decision.

Did starting with 13 episodes give you an advantage, or did you have to acclimate?

It’s really hard to go straight to 13 and not do a pilot. You can’t make mistakes, the learning curve has to be so, so fast. There are things we might have done differently had we been able to get a little more time, but we didn’t, and we got there, and it ended up being great. I don’t regret any of it. It was just really hard, and at the end of the season, both [co-creator] Howard Morris and I ended up with pneumonia. I mean it physically almost killed us.

You mentioned in the Q&A that your aunts don’t know about Netflix. Is Netflix trying to pull in a different demo with the show? Is there a 55- or 65-plus demo?

There is, and they’re not as surprised that that demo is watching. …But what’s happening that’s interesting is that kids are watching it with their older parents. So it’s become a little more multigenerational. The fear is “only these people will watch,” but we have a lot of people in the LGBT community, and we have a lot of young people watching. Getting a shoutout from Miley Cyrus makes a huge difference.

Do you think binge-watching has killed the anticipation of the TV finale?

No. You just have to think about building it differently. When you write a scene, when you write a full script, when you write a season, there is a build to it, and it has to have a certain amount of forward momentum, and it has to have a climax. The climax happens in the finale, and that climax, whatever it is, will leave you with enough anticipation that you’ll want to come back next season. What I’m finding happens is that people see the 13 and go, “More! We don’t want to stop right now.” And they have to wait a year. So in some ways, the bingeing of it can make it frustrating because it’s over so fast. 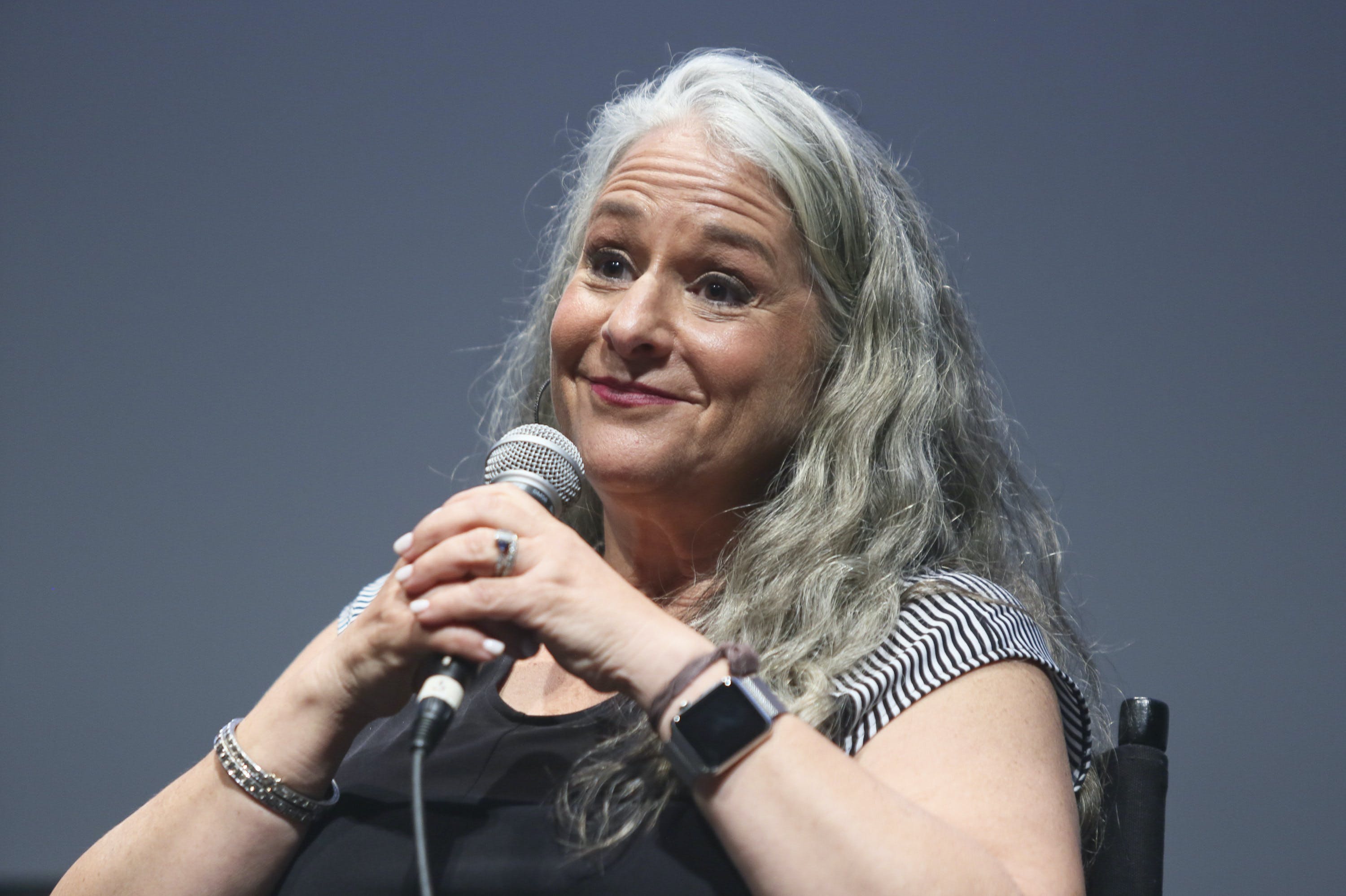 Speaking of climax, you mentioned the show addressing the issue of vaginal dryness. Did that come from a real place, or was it just—

Are you asking me if I have a dry vagina?

[Laughter] After menopause, most of us do.

It’s not something I’ve talked about with my mother yet.

Thank god my mother’s dead because she couldn’t have watched this show. It would have killed her.

You know, things happen after menopause, not just to our bodies but to how we view life. Things really change at that point. And you’re sort of looking down the barrel, you’re looking at your third act, and there is a difference when you’re 70 and when you’re 60 mainly because of a kind of vulnerability that happens to your body when you’re 70. But these are all the things all of us are going to be dealing with. And why are we not talking about it? Why are we not talking about things that happen to half the population? And this is the most marginalized group of the population. Baby-boomer women. They are so intensely marginalized. And the feeling was, we’ve got to say shit. We have to show everybody that we not only have stuff to talk about, but we have stuff you can learn from us. We have life experience. And we have hope. Even if we are marginalized, we have a lot to say.

So I did want to talk about sexuality with older women because people usually go “Ugh” when you talk about an older woman having sex. Fuck you. We can have sex when we’re older, and we’re going to find a way to make it beautiful and lovely and important. And it’s just as important for us as it is for a 20-year-old, if not more so, because it’s about intimacy. I got a little excited about that one. See, the dry vagina leads to everything.

It opens everything up. Yeah, I think a lot of the heartbreak on the show is these women trying to figure out what they are without men, but did you also want to focus on how women’s friendships change at that age?

That’s part of it. They have each other to go through it with. Friendships aren’t that interesting as story, but the growth of the friendship as a result of the story is kind of interesting. For Grace, it was living without a man, but for Frankie, it was about living without her best friend. So it’s slightly different for each of them. For your best friend, it’s those little things every day. “Oh, I just saw a thing and I have to tell Sol.” It’s those small moments that I think kill Frankie. For Grace, it’s the public things.

Do you watch Amy Schumer at all?

Some. I tend not to watch comedy, but I did watch a bunch of that, and I think she’s hilarious.

Did you see the “Last Fuckable Day” episode?

I’m curious if that ties into the show at all—that women, and women in Hollywood, have an expiration date.

Not anymore, hopefully. It’s a horrid thing, it’s true. But the truth is, I’ve always been told that writers have an expiration date too. Not showrunners but writers, because they want the young [people with] a finger on the pulse. Or at least it used to be. Now there are so many outlets and groups of people looking for something they can watch. There’s more opportunity, I think, not only for the writer but for the actor. TV is changing.

There’s this phenomenal book called We Are All Completely Beside Ourselves. I don’t know if you’ve read it. We’re actually turning it into a miniseries. My favorite book of the past five years. It’s exquisite. Karen Joy Fowler wrote it. And we were going around trying to set it up as a movie, and we were told that unless you have Sandra Bullock, Meryl Streep, or Angelina Jolie, it will not get made. That’s not true with TV. With TV, they’d like a name, but it doesn’t have to be the only women who can sell a movie. And I think part of the problem with the only women who can sell a movie is they don’t try selling them with anyone else. There are these arbitrary rules about age. Well, that’s changed. It’s just an arbitrary, misogynist way to look at the industry, for these men to say, “Sorry, unless it’s one of them, nobody wants to see it.”

Have you seen the fan petition going around to fix the show’s wage gap?

What do you think about that?

It’s misguided. I tried to explain to someone, when you’re building a football team, you don’t pay based on how many games they’re going to be in. You don’t pay based on their position. You pay based on their ability and their stature and their numbers. I’m building a team. It’s not about male/female; it’s that these four actors are the same version of athlete. They all have very big names, they all have great stature, and they are equals in that world. I don’t see it as a male/female thing at all. But you want to get Martin Sheen? You’ve got to pay for Martin Sheen. And then you want to get Sam Waterston? You’ve got to pay for Sam Waterston. These are people who have been on TV a great deal recently. So, these are my athletes.

Have you had to navigate those waters yourself, in terms of income inequality in Hollywood?

Personally, no, I have not, because for the writer, there’s kind of a step process. You start as this, you go to this, you go to this. We started as writers. We got paid next to nothing, but that’s because it was our first time doing it and they were taking a big gamble on us. And that was Dream On. … And there was no inequality on Friends. It started with who’s had more work and ended with who’s got more experience. And it ends with, you know what, we’re an ensemble. Everybody gets the same.

There’s been a lot of comment about the first episode being pretty dark. Was the intention to give us this realness first?

The intention was to do a real comedy, and it was extremely important to us that the first episode feel truthful, because you had to buy into the truth of it to be able to do the comedy of it. Otherwise, it would once again be marginalizing the 70-year-old woman by saying it’s just a funny thing. It’s not a funny thing. Your husband leaving you after 40 years is one of the most painful things that can happen. And it took us time, and I actually think we got better at it as the season went on, but also their situation changed. Once they were able to be OK and were starting to put one foot in front of the other, it didn’t have to be so dark. And I think there were moments that, as we went on, that walked the line really gently.