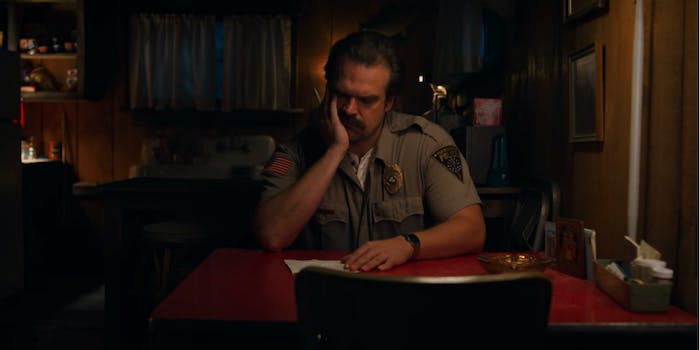 The end of season 3 leaves the door open (three inches) for a bigger battle.

It’s not the final line of Stranger Things season 3, but it’s the line fans are hanging their hopes on. The Netflix series’ latest season introduced a new Mind Flayer (and made the Starcourt Mall its epicenter), gave us the possibility of Joyce (Winona Ryder) and Chief Jim Hopper (David Harbour) finally getting together, and tested the boundaries of nostalgia with a Neverending Story theme-song duet.

But the final episode was also a heartbreaker. Here’s an explainer for season 3’s post-credits scene and what it could mean for season 4.

Jim Hopper had a complicated season. As the guardian of a teenage girl, he’s trying to be more upfront about feelings and boundaries, especially now that El (Millie Bobby Brown) is spending more time with Mike (Finn Wolfhard). But Hop still has glaring anger-management issues. In episode 8, he and Joyce have snuck into Hawkins Lab and Hop defeats the Russian Arnold Schwarzenegger stand-in. Joyce is supposed to shut down the machine, and when she does, it causes an explosion. It’s assumed that Hopper’s dead, which makes the speech he wrote to give to El and Mike, read in voiceover at the end of the episode, even more devastating.

However, we never actually see Hopper die or see his body, just the explosion. Redditors have zoomed in even more, showing that Hopper disappeared from where he was standing right before the explosion.

Major Spoilers: Before and After from StrangerThings

The post-credits scene opens on what appears to be a prison in snowy Kamchatka, Russia. We see two guards stop in front of a cell. “No. Not the American,” one of them says, before moving on to the unlucky man who will be fed to a Demogorgon.

Brown told ComicBook.com of the letter-reading scene: “I just immediately wanted to put a camera on me and find the way I react and the way I reacted was pure devastation and sadness, and a distraught child that just lost her father or so she thinks.”

Those last four words could hint that Hopper isn’t really dead, and the majority of fan theories suggest that it’s Hopper in the cell, or that he somehow jumped into the Upside Down. There are also theories that it’s someone from season 1, like Barb or Dr. Brenner. The former is too far-fetched but season 2 did hint that Brenner might not be dead. We see Murray (Brett Gelman) escape with Joyce so it’s not him, but you can call his number and hear a voicemail where he tells Joyce he has an “update” that’s “not good or bad, but it’s something.” Harbour told Entertainment Tonight that it “seems pretty crazy” that Hopper is still alive but that “we should always hold onto hope. We should never let go of hope—but Barb is really dead.”

What it means for Stranger Things season 4

While season 4 hasn’t been confirmed yet, the post-credits scene opening in Russia sets up the possibility that next season might partially take place there, and we might get a better sense of who or what is creating these monsters. Are there more small-town portals around the U.S.? It’s possible Hopper jumped into the not-quite-closed gate and Brenner is alive and helping the Russians, and that the two “dads” will meet up in season 4. El lost her powers in season 3, so she can’t locate Hopper. Or so we think. His repeated request that El keep the door open three inches might have a bigger application.