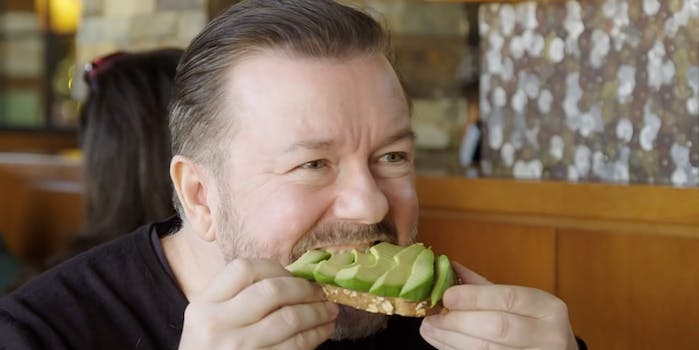 The comic unpacks the one-liner with Ricky Gervais.

There’s not much innovative about the 11th “season” of Jerry Seinfeld’s Comedians in Cars Getting Coffee, which is fine. Inside of these 12 new episodes of his easygoing “interview” series, the Seinfeld star continues to squeeze that same orange for more, delivering fresh juice in the names of Martin Short, Jamie Foxx, Ricky Gervais, and Seth Rogen—and, yes, the legend Eddie Murphy.

Oh, and he makes a racist joke about China, reflects on it, and by the episode’s end, admits that racist jokes are, among other things, awful comedy.

Comedians in Cars Getting Coffee season 11

A series veteran, Ricky Gervais appears in a two-parter hinged around the meditation and deconstruction of wildly offensive jokes, including ones about Chinese people and the Holocaust. Seinfeld riffs about how Chinese people all look the same to Americans in an apparently improvised one-liner, Gervais cackles nervously, and they spend the rest of the episode reflecting on it. Gervais asks Seinfeld soberly if he’s going to leave it in.

The first part of the Gervais episode ends on a ’60s-era TV cliffhanger with a voice-over about the joke itself, cheekily daring people to tweet about its racism. Here Seinfeld’s baby-boomer lens is glaring—dismissive about political correctness as it relates to comedy’s core function of calling out societal perils via jokes—but at least he felt like the quip warranted examination and denouncement, instead of easily editing it out.

In the first episode, Seinfeld gets right to the goods with Murphy, picking him up in a gorgeous, metal-gray 2004 Porsche Carrera GT, to discuss his beginnings as a Long Island, New York native. He and the host continuously heap genuine praise upon each other’s success, going back to their origins in the ultra-competitive New York City circuit. Of course, the big news is that a comeback standup special could be in the works for Murphy: It’s alluded to in the interview and reports of a mega-deal with Netflix perhaps uncoincidentally landed on Friday.

“You know that you not doing standup drives people crazy. You know that, right?” Seinfeld explains to the Beverly Hills Cop star.

Murphy then reveals that late, great comic Don Rickles frequently nudged him into the consideration.

“I’m going to do it again. Everything just has to be right,” Murphy asserts. “You have to get up there and start working out.”

The timing could not be better, given notice of a potential blockbuster Coming to America sequel, slated for a 2020 release. He and co-star Arsenio Hall appear locked in to once again perform numerous roles. But what’s intriguing about Murphy is that he’s not as naturally funny as one would be led to believe. Like Seinfeld, there’s definitely a subtle on-off switch. His revelations of competitiveness with his hero Richard Pryor and that he largely does nothing throughout his day propose a multitude of notions for future think-pieces.

Elsewhere, the hilarious and giggly Melissa Villasenor, fanny pack and all, eats all the MSG-infused foods with Seinfeld at Brooklyn, New York’s Museum of Food and Drink (MOFAD). Seth Rogen’s inclusion also builds out an unusual throughline, starting with Murphy, on a shared disillusionment in Bill Cosby.

Predictably, the season’s best episode features Jamie Foxx, who confirms himself to be one of the funniest, most well-rounded people in the world. He reveals he went to college on a classical piano scholarship, and that Johnny Carson’s iteration of the Tonight Show influenced his perceptions. Yet it’s the unmatched, succinct vividness in which he recounts his stories that leaves the viewer (and Seinfeld) captive. His lively impressions soar shockingly on-key, nailing the subjects’ root essences.

Comedians in Cars Getting Coffee is basically Seinfeld rousing excitement for compelling characters in a series about nothing specifically, which is likely part of the larger joke. He still doesn’t care to ask what an audience would like to know about his guests, but that’s not the point. It’s a series of conversations, artfully edited for comedic punch. There’s no pretense to it; it’s as honest as the show could be. Remember—it is literally called Comedians in Cars Getting Coffee.