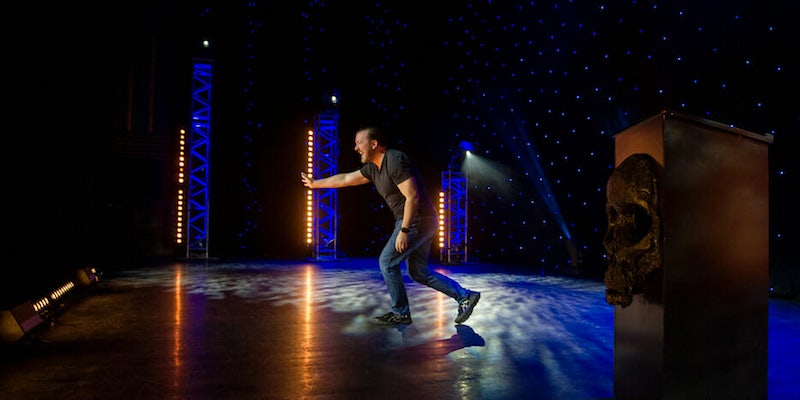 Ricky Gervais is getting destroyed on Twitter for his Netflix special

But Julian Assange is a fan, apparently.

Critics on Twitter have been relentlessly roasting English comedian Ricky Gervais for his latest stand-up special Humanity, in which he proves he still doesn’t understand what’s wrong with making demeaning jokes about transgender people.

Gervais spends the first 20 minutes of his stand-up routine making jokes about Caitlyn Jenner—whom he famously referred to as “Bruce” during a stint at the 2016 Golden Globes—and transgender people at large, comparing them to humans wanting to become chimps.

Watchers were predictably not amused and let Gervais know on Twitter.

If Ricky Gervais makes a shit joke in the woods and no white males are around to call him a genius, did he say anything?

These are Ricky Gervais's last gasps at relevancy. The comedy world is moving on to more thoughtful, exciting things, and he can feel himself being left behind. Rather than evolve, he's becoming a cranky old man. It's sad to see.

ricky gervais: lol trans people, am i right? gender much?

ricky gervais: FREEDOM OF SPEECH DATES BACK TO THE GREEKS AND THE ROMANS AND IS A PRINCIPLE IN THE UNIVERSAL DECLARATION OF HUMAN RIGHTS IT PROTECTS MY RIGHT TO BE OFFENSIVE AND I

ricky gervais is so scared of being called boring

Learning that Netflix paid Ricky Gervais 40 million dollars for a comedy special I turned off after five minutes makes me kind of depressed.

Someone tell Ricky Gervais to start offending the nazis if he wants us to care so fuckin much about him. There's nazis, Ricky. it isn't 2002 anymore

Ricky Gervais: Political correctness has gone MAD! What next? Do I have to call a manhole a PERSONhole? Is that it? I bet it is! A bloody personhole. Can you belieeeeeve it?
Ricky Gervais’s wife: I’m leaving you

Rousseau actually made the graphic—using a quote found on Reddit—to show how tired and unoriginal Ricky Gervais’ schtick has become, according to Gizmodo. Assange earnestly tweeting the fake quote proves that even fans of the comedian can’t distinguish his jokes from quotes found on an “edgy” Tumblr blog.

Gervais—who’s known for insisting that he really, really doesn’t care what the haters say—fired back on Sunday. He included a photo of a chimp to make sure it’s clear that he feels no remorse about dehumanizing members of the LGBTQ community.

Sitting back reading all your amazing tweets about #Humanity on Netflix. pic.twitter.com/8uLF7W7AUq

Humanity premiered on Netflix last week. Read more about how the stand-up special tackles the “epidemic of offense” here.