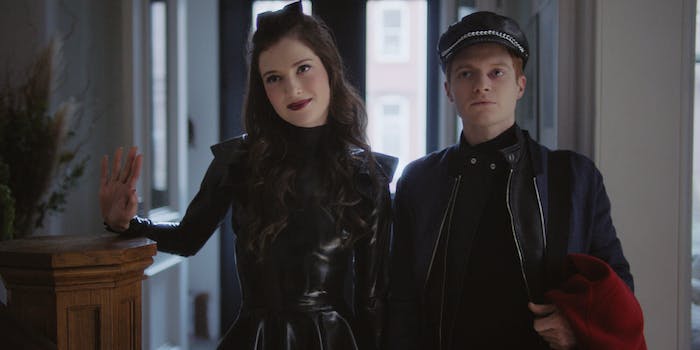 ‘Bonding’ squanders its potential with weak jokes and limp structure

Shorter is not always better.

In the era of smartphones and YouTube, there is a perception that when it comes to comedy, the shorter the run time, the stronger the series. As dramas have ballooned in length, comedies have continually condensed. Netflix has championed this new trend, with The End of the F***ing World episodes running 20 minutes, and some episodes of Special running as short as 15. Bonding, a new Netflix series from actor, writer, and director Rightor Doyle, continues the pattern, averaging a breezy 17 minutes per episode. But while The End of the F***king World’s edgy, angsty, and hilarious stories have a relentless drive that made its first season one of 2018’s great surprises, Bonding feels underwritten, under-planned, and ultimately underwhelming.

This does lead to some fun premises. In the pilot, Tiff and Peter kidnap a customer (at his behest) and Peter is introduced to a whole new world. In episode 2, Peter tests himself: Can he bring himself to pee on a client? Episode 3 explores the distinction between sex and sexuality. But with their short run times and not particularly sharp joke writing, the episodes rarely deliver much beyond the promise of their premises. The already-short run time is further limited by standup bits that break up the show (yes, this is another show featuring an spiring standup comedian set in New York), often leaving less than 15 minutes per episode for actual plot development.

Sitcom episodes historically run 22-23 minutes because of network commercial requirements and half-hour time slots. This length has worked for sitcom writers for decades because the resulting 30-page scripts fit nicely into two- or three-act structures with A plots (lead character), B plots (co-lead character), and C plots (runners). Of course, you can play with this structure: End of the F**king World focuses solely on the two leads, creating a darkly comic Bonnie & Clyde with no excess fat. Barry often mixes drama structure (three to five acts with action set pieces as breaks) with traditional sitcom structure, resulting in high intensity and surprising laughs. But if you don’t have an idea for how to reinvent the wheel, an experimental structure can just feel messy or aimless, as it does here. It’s fine that Bonding isn’t playing by the rules, but it doesn’t seem to have settled on its own rules.

Episodes of Bonding feel more like a web series than a fully formed TV show. There isn’t time to fully develop Tiff and Peter’s points of view, resulting in muddy plotting and incomplete character arcs. In the pilot, Tiff offers Peter a job, and he is clearly uncomfortable. But he needs money, so he takes the job. That’s a fine sitcom plot, but with the shortened run time, we don’t see much of a change in Peter, as he accepts the gig without much resistance. Meanwhile, Tiff doesn’t change at all; that’s not how pilots are supposed to work.

It’s a shame that the structure of Bonding is so weak, because there’s a lot of potential here. Sex work is a fresh and interesting topic for a comedy, especially with issues like SESTA-FOSTA in the public eye. Tiff and Peter’s work gives rise to some nice bits, and there are good jokes about piss play, BDSM, foot fetishes, and all manner of kinks. But when a good joke gets rolling, the bit often feels unfinished, the writing peters out, or the scene leads to a dead end. When these gags are couched in tired plots like “student/teacher sexual tension” or “struggling standup has stage fright,” the uneven gives way to the bland.

Netflix’s goal for both its standup specials and sitcoms seems to be churning out a lot of cheap content by as many creators as possible. While this offers a lot of new opportunities for fresh voices (this is Doyle’s third writing credit and directorial debut), shows like Bonding leave you wondering if greater support for fewer projects would produce better results. Why churn out shows every week if the majority of them will be forgotten by the time the next crop arrives on subscribers’ homepages?

Just as Bonding’s writing feels rushed, so do the technical elements. The show looks like it was shot quickly; it is often poorly lit and the production design feels phoned-in at best. The actors often feel undirected, not demonstrating clear motivations and losing jokes to mumbling and poor emphasis. The show often has the character of a strong student film or festival submission: There is potential, but not strong enough execution for a series meant to compete with the offerings of HBO, FX, or Comedy Central.

Bonding mostly squanders the potential of its charming leads and the fresh voice of its creator. The disappointing thing is that these issues seem easily fixable: A few more minutes, a few more revisions, and a little more money would have gone a long way. But we might not have the opportunity to figure out what might have been, as there are many shows telling stories about twenty-somethings navigating the fringes of the big city. Bonding could grow into something more, but by then a lot of its potential audience may have changed the channel (or streaming platform).