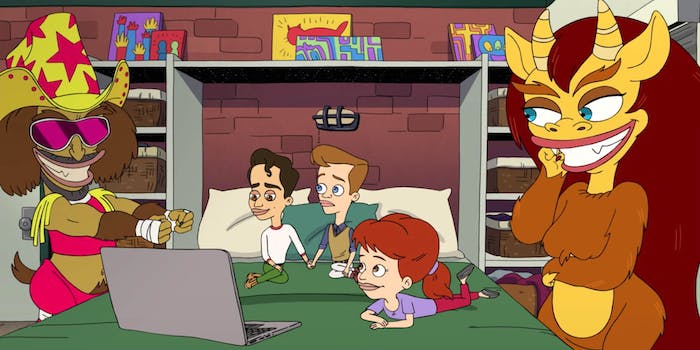 Furry penises and talking vaginas abound in season 3 of the profane animated series.

Leaning on long-standing jokes, favorite characters, and pop culture references, season 3 of Big Mouth retains the same elements that made the first two seasons popular. The series takes a courageous approach to comedy, deviating from the formulaic blueprint that trips up many adult-themed animated series. It pays off in every relatable moment, lending more depth to characters as they brave the ever-changing journey through adolescence.

Challenging topics like objectification and gender roles start the season off strong. The story quickly hits its stride, gliding into digital obsession, toxic masculinity, and the spectrum of sexuality. Each episode homes in on a different societal trigger point. Not everything is explained through furry penises or talking vaginas, either. Big Mouth season 3 deftly hops between lessons on genitals and orgasms to broader topics like the Me Too movement, cell phone addiction, and Adderall abuse.

While far from the first coming-of-age story of its kind, Big Mouth approaches a well-worn format with a fresh, youthful energy. Painfully awkward and nightmarish in its accuracy, season 3 maintains its laser focus on the shared trauma of puberty. The series’ in-your-face approach to subjects like the female orgasm and substance abuse urges for better education and communication in the most pubescent way possible.

Still, several lesser characters continue to distract from the better parts of the show. Duke Ellington’s dry story arc is a hitch in the middle of an otherwise consistent season, and the overused Coach Steve is nothing but a rehash of tired material. Andrew—depraved bastard that he is—somehow persists as a favorite despite his story arc transforming into an increasingly strange, sexual nightmare. His likability is almost certainly thanks, in part, to John Mulaney’s excellent performance. Unlike Andrew, however, there is not a scene with Coach Steve that feels necessary. He appears to be included as fan service, though it’s unclear which fans asked for him.

Occasionally, the jokes reach a level of raunch that will probably make some viewers turn away. Big Mouth revels in its depravity, tapping into the most perverted parts of the adolescent experience for its material. Just about everyone will find something to relate to in the season’s 10 episodes—even if they don’t want to.

The relevant social commentary makes Big Mouth season 3 particularly enjoyable, but it could potentially damage its longevity. A good joke about Donald Trump, fake news, or Me Too is welcome in 2019, but in a few years, these jokes may feel dated and overly specific. But Big Mouth season 3 is solidly grounded in the now. It pushes audiences to relate to the world around them while also examining their own adolescence.

Blatantly self-aware, the series constantly teases Netflix, Amazon Prime, and the viewers themselves. Characters occasionally break the fourth to deliver a scathing joke or piece of social commentary. The season wends its way through sexual hijinks and explicit scenes, while still engaging the audience with intriguing storylines and genuine character growth. Season 3 concludes with a big enough cliffhanger to pique viewers’ interest for season 4.

Despite some rocky storylines scattered throughout—why, Lord, is Coach Steve making a comeback—Big Mouth season 3 is an often riveting and hilarious installment, adhering to what made the first two seasons great. It is constantly biting, with predictably stellar performances from the entire voice cast. Poignant and topical, Big Mouth is a modern gem that learns lessons from titans like The Simpsons and Family Guy without rehashing tired plotlines.