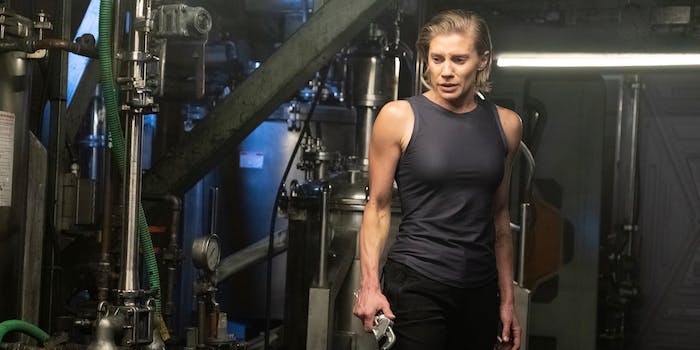 The Netflix series starring Katee Sackhoff can't get off the ground.

Another Life, like many recent science fiction TV shows, borrows a lot from the shows and films that came before it. It’s got hints of Arrival, your average Star Trek episode, the Alien movies, and the short-lived Syfy series Nightflyers. But instead of using those themes and tropes to explore something new or exciting, Another Life is an unoriginal, jumbled mess filled with flimsy characters.

RELEASE DATE: 7/25/2019
CREATOR: Aaron Martin
STREAMING: Netflix
A team of astronauts travels to a far-off planet to make contact with the aliens who sent a mysterious Artifact to Earth.

It’s got the right ingredients to make for a fascinating show. After a tall, intricately shaped object called the Artifact (whose psychedelic coloring is reminiscent of the Shimmer in Annihilation) appears on Earth, a team of astronauts boards the Salvare on a diplomatic expedition to the object’s planet of origin. Viewers are thrust into the thick of the action as crew leader Niko Breckinridge (Battlestar Galactica’s Katee Sackhoff) gets woken up by William (Doctor Who’s Samuel Anderson), the ship’s A.I., because something is amiss. There’s also a push to communicate with the aliens in the Artifact back on Earth, with the larger question of what they want looming overhead.

The concept falls apart quickly. Although Another Life has an ensemble cast, it gives most of its supporting characters the short shrift in favor of Niko. She’s the experienced veteran, which makes her suited to lead, but it separates her from the rest of the younger crew, including the captain she replaced, hotshot pilot Ian Yerxa (Tyler Hoechlin). At one point, a crew member who believes everything goes downhill after age 27 calls Niko “ancient.” We spend so little time with the rest of the crew that it’s hard to feel emotionally invested when they start to die and are replaced by crew members woken up from a deep sleep.

Sackhoff does what she can in the role, often forced to inject emotion into poorly written, cliched dialogue and predictable plot points. Niko is almost wholly defined by the guilt over her decision on a previous mission that resulted in the death of several crew members, and accepting the mission that separated her from her husband Erik (Justin Chatwin) and 8-year-old daughter Jana (Lina Renna) back on Earth. This guilt comes to a head in episode 4, the season’s best. (All 10 episodes were made available to critics.) Another highlight comes later in the season as the show explores the complicated relationship between Niko and fellow pilot Cas Isakovic (Elizabeth Faith Ludlow).

It’s in the conflicts aboard the Salvare that Another Life truly fractures. It’s not just that the crew doesn’t get along (as is the case with a lot of sci-fi shows that trap the crew on a spaceship) or that they often present a bigger threat to themselves than the deadly external factors do. It all just starts to feel formulaic, as Another Life recycles plot points that appear not only in other sci-fi series, but that already took place earlier this season.

Life back on Earth isn’t much better, and the show grinds to a halt every time it cuts to Erik’s attempts to communicate with the aliens. Jana is underdeveloped, at times feeling like little more than a plot device. The only person who looks like they’re having any fun on this show is Selma Blair as Harper Glass, a journalist who will do anything to uncover the truth (which often veers into caricature territory). This includes harassing Erik for information and mentioning her 250 million followers so often that you could make a drinking game out of it.

Unfortunately, that’s not enough to shake Another Life out of its near-constant funk. Genre cliches and one-dimensional characters result in a show that looks flashy, but merely rehashes the same story that’s already been told better.