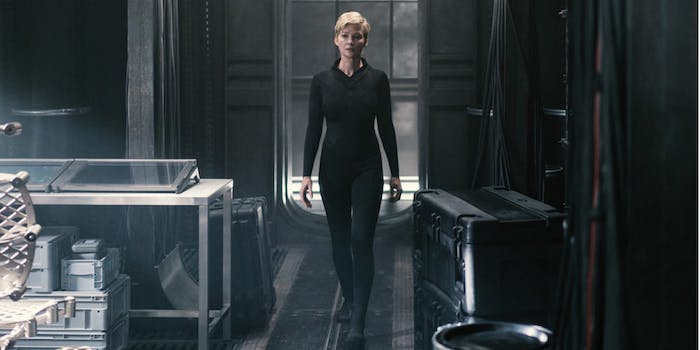 ‘Nightflyers’ is a slow-burning horror story on a mysterious spaceship

The first five minutes of Nightflyers, Syfy’s newest sci-fi horror miniseries, are tense and exhilarating, dropping viewers right into the thick of the action without any explanation. It’s a frantic race against time as a woman (who we later learn is a psychiatrist named Dr. Agatha Matheson and is played by Gretchen Mol) tries to send out a warning before a murderous crew member can get to her—and she’s adamant that the message she’s sending off the ship isn’t a distress call. The last moments leave plenty of questions about what happened on the advanced Nightflyer ship and how everyone—or whoever’s left onboard, based on the amount of blood seen in the background—arrived at that point.

Unfortunately, the show’s first two episodes never quite reach the high point of its cold open. Nightflyers is a slow-burning sci-fi horror mystery filled with plenty of intrigue and a potential reward for those who stick it out to the end. But so far, it offers little in return with a show that’s chock full of familiar set pieces, homages, and largely forgettable characters.

Nightflyers is based on George R.R. Martin’s 1980 novella, but apart from a sprawling ensemble cast and its high death count, the show has little in common with Martin’s much more famous series. This isn’t Game of Thrones in space, and if you go into Nightflyers expecting as much, you’ll be disappointed. You don’t necessarily need to read Nightflyers before watching (I didn’t get very far into the novella), but it does help distinguish some of the characters.

After the cold open, the series rewinds to the not-so-distant past—still a highly futuristic 2093—as a crew of highly trained scientists sets off on a mission to the edge of space to contact alien life. In a similar vein to the recent YouTube Premium series Origin, many of the passengers keep their baggage and secrets close to their chest.

Karl D’Branin (Eoin Macken), an astrophysicist who’s in charge of the scientific mission on the Nightflyer, is haunted by the memory of his dead daughter, both in his frequent revisits to happier times and by her very presence on the ship. Lommie (Maya Eshet), who is able to hook up to the ship’s computers through a port in her arm, has some dark secrets of her own. Thale (Sam Strike), a telepath known as an L-1, is trusted by almost nobody (apart from Agatha Matheson, who manages him) because of what he might be capable of, especially once the crew ends up injured. Melantha Jhirl (Jodie Turner-Smith) is more prepared for the trip than most—she was “genetically enhanced” for space travel—but finds herself in situations she cannot control.

Roy Eris (David Ajala), the captain of the Nightflyer, is rarely seen but almost always watching as he appears to the other passengers in the form of a hologram. While he can manipulate situations to his liking, he eventually discovers he doesn’t have complete control of his own ship.

Like AMC’s fantastic arctic horror miniseries The Terror, Nightflyers entices viewers with the promise that everything will eventually go horrifically wrong. When it does, the crew quickly blames Thale, regardless of whether he’s even capable of causing their predicament. Some of the chaos might be by design (or a small side effect of a larger mission being kept in the dark), but much of it pales in comparison to what we know is eventually coming. The aesthetic, from the watchful red eye of the ship to the running setup, often hearkens back to 2001: A Space Odyssey.

While it does contain some good character moments, Nightflyers—at least so far—is more about mystery than the characters themselves, many of whom blend together as the mystery starts to unfold. While fans may end up rewarded for staying the course, the slow pace might lead some viewers to abandon ship early.

Nightflyers is airing Dec. 2-6 and Dec. 9-13 at 10pm EST on Syfy. The first two episodes are currently available to watch on Syfy.com, On Demand, and on the Syfy App.