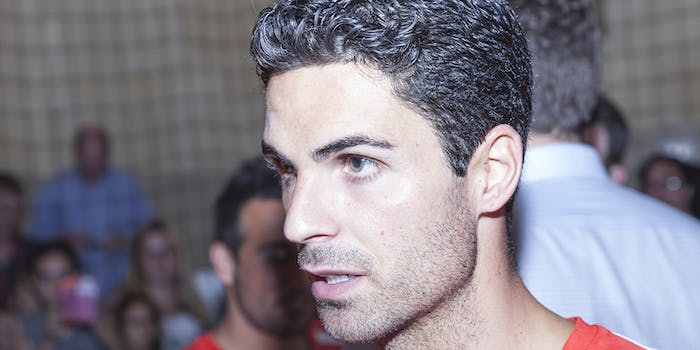 Arsenal's got its new manager, and it's one familiar to fans.

Former Arsenal player and current Manchester City assistant manager Mikel Arteta was named the Gunners’ manager on Friday, ending speculation about who would officially succeed Unai Emery in what is becoming a potentially lost season for Arsenal.

According to the club’s announcement, Arteta will start in his new post on Sunday. Arteta was famously with Arsenal as a player between 2011 and 2016, before moving from playing to coaching. He joined Pep Guardiola’s coaching squad in Manchester and has been learning and developing as a manager there since. This will be his first managerial position, succeeding a more seasoned but ultimately unsuccessful Emery.

Arteta came up through Barcelona’s youth system and played professionally for a number of clubs, including Rangers, PSG, Real Sociedad, and Everton. Though he did feature for Spain’s youth teams, he didn’t achieve a senior cap during Spain’s golden era of international play.

“This is a huge honour,” Arteta told Arsenal.com. “Arsenal is one of the biggest clubs in the world. We need to be competing for the top trophies in the game.”

“We all know there is a lot of work to be done to achieve that,” he added, “but I am confident we’ll do it. I’m realistic enough to know it won’t happen overnight but the current squad has plenty of talent and there is a great pipeline of young players coming through from the academy.”

Arteta will officially join the organization on Sunday. Interim manager Freddie Ljungburg, whose time at Arsenal’s helm only lasted three weeks, will be managing one more match: The early contest on Saturday between Arsenal and Everton.

Here’s everything you need to know to stream Arsenal vs. Everton live.

Arsenal (recent form: DDLWL) lost in undignified fashion on Sunday, letting Manchester City put in three first-half goals for what would be a final 3-0 margin. Arsenal now sits in 10th after registering just two wins since September. It appears that the only way it’ll achieve Champions League status next year is to win the Europa League. Fortunately for them, they’re on to the Round of 32, starting at Olympiacos in February. In the meantime, Arsenal has matches with Chelsea and Manchester United as part of its fixture season.

Everton (recent form: LLLWD) is undefeated in the Duncan Ferguson era! It added a draw with United over the weekend to its earlier win over Chelsea to give the blue side of Liverpool some newfound life. Everton’s currently up to 16th in the table and now three points from safety, though at this point in the season, it seems that only Watford is truly ready for the drop.

The William Hill oddsmakers are calling this one fairly even, with Everton being pipped for +130 odds (wager $100 to win $130), Arsenal getting +190 odds, and a draw being the least likely scenario at +265.