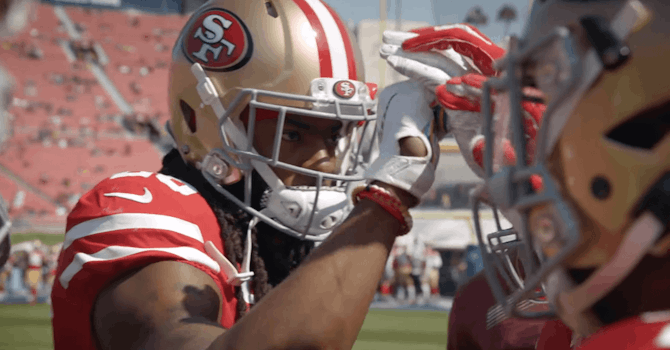 How to stream 49ers vs. Seahawks on Monday Night Football

Seattle and San Francisco face off for supremacy in the NFC West.

The NFC West might be the strongest division in football and the San Francisco 49ers and Seattle Seahawks are its two strongest teams.

Neither team amasses amazing passing numbers, yet they are both piling up victories week in and week out. And when these offenses click, both the Seahawks and the Niners can feel invincible. On Monday night, they will face off for supremacy in the NFC West in what should be a great matchup. This game will likely come to down to which elite element of this team performs better. Is it going to be Seattle quarterback Russell Wilson who makes the difference once again or is this San Francisco defense simply too good to be bested, even by one of the league’s most talented signal-callers?

Here’s everything you need to know to live stream 49ers vs. Seahawks, including what to watch for on the field.

49ers vs. Seahawks live stream: How to watch MNF online

San Francisco 49ers vs. Seattle Seahawks stream: What to watch for

This game is incredibly important for both teams. If the Niners win here, you like them to hold onto the NFC West and pocket a playoff bye. If Seattle can take the W, that sets the stage for a very meaningful rematch toward the end of the season on Dec. 29.

The Seahawks don’t win pretty, but they do win. Seattle went into overtime against the subpar Buccaneers last week and only beat the awful Falcons by one score the week before. Yet, the team is still ranked third in Offensive DVOA and led by Wilson’s precise throwing. As the season goes on, D.K. Metcalf and Tyler Lockett continue to develop into impressive receiving options for Wilson, and Chris Carson is productive every week on the ground. This offense is really starting to hum.

Seattle’s defense is weak, hence the close games, and the pass rush has been a particular disappointment. The secondary isn’t very good either: Matt Schaub and Jameis Winston have looked like all-stars in consecutive weeks. Thus far the defense has been coached well enough for Wilson to save the day, but you would like to see this team win more comfortably.

It’s a different story in San Francisco where an amazing defense has been carrying a lackluster, if effective, offense. That being said, the recently acquired receiver Emmanuel Sanders may be the piece this team has been looking for. For the last two weeks, Jimmy Garoppolo has finally been putting up numbers worthy of his hyped-up reputation and the running game has really taken off. If this is the new Niners offense, it’s hard to imagine them losing many games the rest of the way.

Despite a soft performance last week, San Francisco’s defense has been historically good. Nick Bosa has been phenomenal in his rookie campaign while players like Dee Ford and Arik Armstead bolster what is a great defensive unit from top to bottom. Defensive coordinator Robert Saleh will have a head coaching job next year if he wants one.

Despite something of an off week against the Cardinals, the Niners defense should be back in top form this week. Even against a QB as top-shelf as Wilson, this D should be able to do some damage. While Jimmy G is still developing and can be rattled, Seattle’s defense might not be good enough to shake him off of his game here.

We lean toward a Niners victory because of the huge gap between these two defenses. But, many people who have underestimated Wilson have been wrong before. Don’t be surprised if he works his magic once again.