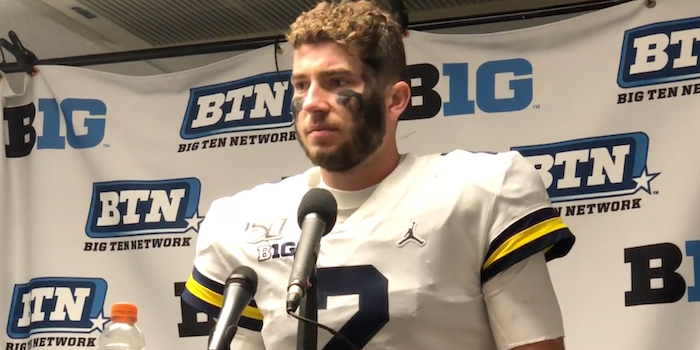 How to watch Michigan vs. Penn State

In a must-win for Michigan, can they generate a running game against Penn State?

The No. 16 Michigan Wolverines travel to Happy Valley to face the No. 7 Penn State Nittany Lions at Beaver Stadium in a crucial Big Ten clash.

Despite what the scoreboard might indicate, Michigan didn’t exactly dominate Illinois in its 42-25 win last Saturday. The Fighting Illini didn’t show any fear of a team that, on paper, should’ve dominated them, which maybe says something about the respect other teams have for this year’s Wolverines.

Michigan’s putting up over 30 a game in a balanced attack: 231 passing yards a game versus 156 rushing yards. However, QB Shea Patterson hasn’t taken the big leap forward as an elite passer. The defense, led by LB Kahleke Hudson’s 58 tackles, has given up 161 passing yards and 123 rushing yards per contest. They are allowing 17.5 points per game.

The Nittany Lions squeaked by last Saturday in a tough 17-12 game at Iowa. Penn State could never truly get going and needed all 102 of running back Noah Cain’s yards to push through.

Penn State has averaged a stout 42 points a game, including 465 total yards, though QB Sean Clifford managed only a measly 117 through the air last week. The Lions’ defense is their real calling card, though, giving up just 8.2 points a game on 260 total yards allowed. Michigan’s offense can’t afford to get stuck in the mud early, especially playing away.

Michigan vs. Penn State: What to watch for

As usual, the big question in this matchup will be which Michigan team will show up to Happy Valley. Penn State’s defense is dominant, allowing around 54 yards on the ground. If the Wolverines can’t generate any sort of run game, can head coach Jim Harbaugh depend on Patterson to carry the weight? Early returns indicate a tough go if this turns out to be the case.

Holding the chalk line at home, Penn State is currently a 9-point favorite over Michigan, according to Odds Shark. For this season to mean anything, this game is almost a must-win for topsy-turvy Wolverines, but, as the saying goes, “pressure bursts pipes.”