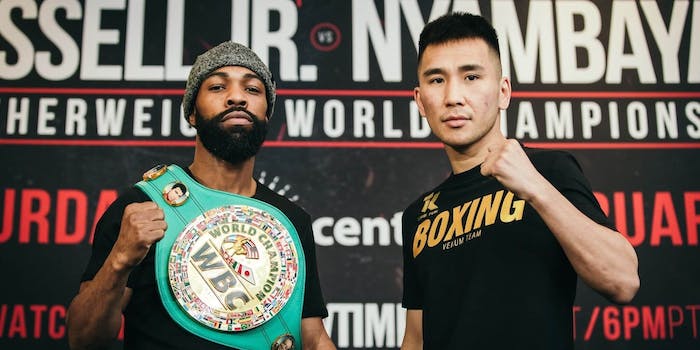 Is Russell, the featherweight titlist, in more trouble than he thinks?

It’s easy to look at Gary Russell’s opponent on Saturday, “King Tug” Tugstsogt Nyambayar, and think he’s got no chance to beat Russell, one of the most talented fighters in the game. After all, Nyambayar has only fought 11 times as a professional, and he’s never faced an opponent anywhere near the level of Russell.

But this might surprise you: Nyambayar could give Russell plenty of problems in a fight you can stream via Showtime on Saturday night, and the betting odds aren’t as wide as you might guess. As of this writing, Russell, who has defended his featherweight title four times and who might have the fastest hands of any boxer in the world, is only a -400 favorite, meaning you’d have to wager $400 to win $100. And the reason Nyambayar is getting more respect is that he has a great amateur pedigree. Even if you’ve never heard of him.

“It’s fine if they don’t know me or are writing me off,” Nyambayar told Premier Boxing Champions. “After the fight, when I win, everyone will know my name.”

Here’s everything you need to know to watch Russell vs. Nyambayar.

There are plenty of ways to live stream Showtime, and that includes YouTube TV and DirecTV Now. Naturally, it’ll cost you a little extra per month to watch the premium cable channel. But the good news is that each service typically offers a one-week trial. We’ve highlighted some of the best live streaming options below.

Aside from the Russell vs. Nyambayar main event, Showtime also will show former unified junior featherweight world titlist Guillermo Rigondeaux moving down in weight to the 118-pound bantamweight division to face Liborio Solis. The show will open with Jaime Arboleda meeting Jayson Vélez in a junior lightweight fight.

Unlike most of the streaming services, Showtime, every now and again, gives you an extended free trial of 30 days instead of the standard seven. Luckily, this is one of those times. For now, you get a free month-long trial with the app, and after that, it costs $10.99 per month (don’t worry, you can cancel any time). If you want to stream Russell vs. Nyambayar directly through Showtime, this is the way to do it.

The best thing about Hulu is that you have the option of watching all the TV shows and movies the service offers while also getting the ability to stream live TV. It’s a solid 1-2 punch for boxing fans (even though the price for Hulu Live recently rose by $10 per month). For Showtime, viewers will have to pay a $10.99 monthly charge after a free seven-day trial. Here’s the complete list of Hulu Live TV channels.

If you’re a big sports fan, particularly of soccer, FuboTV could be the best streaming service option for you. Another big plus for FuboTV is that the streaming service also showcases some of the best local TV coverage of any of its competitors. With Showtime on FuboTV, it’s also a great place to watch movies (along, of course, with top-notch boxing coverage). Here are the complete FuboTV channels list and our FuboTV review.

If you’ve never had a Showtime subscription on Sling TV, you’ll first start with a seven-day free trial. After that trial ends, it’ll cost you an additional $10 per month. One of the best perks offered by this streaming service is that you can select channel packages in an à la carte manner to pay for the channels you want the most. That means you can pay either $30 or $45 per month depending on how much content you want to watch. If you sign up now, however, you’ll actually get $10 off your initial month, bringing your first bill down to just $20 or $35. Here’s a complete guide to Sling TV channels and our Sling TV review.

If you’d prefer a one-stop shop for all your streaming needs, Amazon is just what you need. Plus, after a seven-day free trial, you can add Showtime for $10.99 per month from one centralized media center. This is about as easy as it gets to live stream Showtime and to watch Russell vs. Nyambayar.

Gary Russell Jr. vs. Tugstsogt Nyambayar: Why it matters

Russell is one of the more frustrating fighters in the sport. Not because he’s not talented (he is) and not because he’s not fun to watch (he is). No, the frustration stems from the fact that Russell fights only once a year, depriving fans of watching him defend his featherweight title and show off the talent he has. Russell is still only 31 years old, but at some point, you have to wonder if his inactivity will catch up with him as he continues to age.

“I just have to be better than Gary Russell on Saturday night,” Nyambayar said at a press conference this week. “The past experience won’t matter. If he thinks I’m too inexperienced for this fight, he is going to be in for a surprise Saturday.”

Nyambayar (11-0, 9 knockouts) had an extensive amateur career, winning a silver medal at the 2012 Olympics. He isn’t as experienced as Russell (30-1, 18 KOs) in the pro game, but his opposition has steadily gotten better recently. Last May, he knocked out Oscar Escandon in the third round. A year earlier, Russell had stopped Escandon in the seventh round.

Unfortunately for Nyambayar, he’s also been inactive recently, and this will be his first fight in 13 months. He said he’s not worried about ring rust, and as Russell noted, it’s not like Nyambayar—who is about a 3/1 underdog—is under the pressure that Russell will feel.

“Tug will be the best he possibly can be because he knows he’s facing one of the best fighters in the world,” Russell said. “He has everything to gain and nothing to lose. He’s going to leave it all on the line. … I think Tug is a lot more technically sound than a lot of the guys who I have competed against. … I’m anticipating a tough fight.”