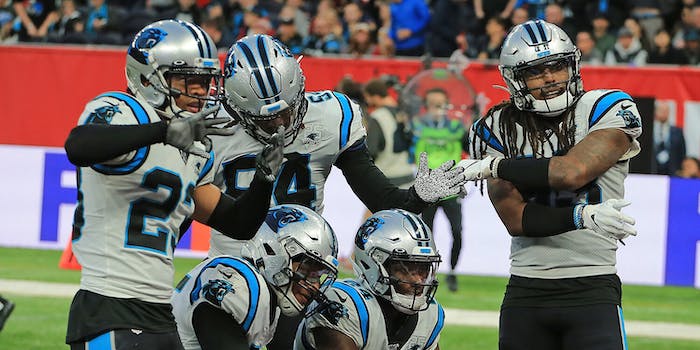 How to stream 49ers vs. Panthers live

Two of the NFL's most surprising success teams face off.

Every year, NFL teams surprise you.

Even though some of the same teams will invariably show up at the top of the standings (*cough* Patriots *cough*), one of the most exciting aspects of the season is watching successful teams come out of nowhere. No teams have exceeded preseason expectations more than the San Francisco 49ers and the Carolina Panthers.

The 49ers are undefeated, largely, on the strength of their defense. It isn’t that their passing attack is terrible, but quarterback Jimmy Garoppolo is still developing and his yardage totals just aren’t on par with elite passers. Last week’s stat line of 12/21 for 151 yards isn’t a totally fair reference, because the game was played in the elements, but some other Jimmy G lines from this season include 20/29 for 181 yards (Week 5) and 18/26 for 166 and one interception (Week 1).

San Francisco’s offense has generally run through rusher Matt Breida and tight end George Kittle this season. While this has been enough to win, you could see the 49ers losing some shootouts later in the season.

So far, the somewhat limited offense hasn’t mattered because the defense has been so dominant. San Francisco has the second-ranked defense by DVOA and four players are in the top 50 in sacks. Though there is a lot to love all over this defense, rookie Nick Bosa has been particularly special. Bosa is already the clear favorite for Defensive Rookie of the Year.

Though Carolina hasn’t gotten as much national attention as San Francisco, they are a very similar team. The Panthers rank third in Defensive DVOA going into Week 8. Though they were on bye last week, Carolina sacked Jameis Winston seven times and picked him off five times in their last outing.

Kyle Allen has been a pleasant surprise at quarterback in relief of Cam Newton, but like Jimmy G, he has some bad games. He went 17/30 for 181 yards against the Jags and 24/34 for 232 against Houston.

Where San Francisco’s defense may be a bit better than Carolina’s, the Panthers have the advantage on offense, and his name is Christian McCaffrey. He is averaging over 100 yards on the ground and 50 yards in the air every week. He also already has nine touchdowns on the year.

The narrative around this game seems to be giving the Niners the edge here, but we see it as a toss-up. Great defenses, strong running games, and so-so game managers under center: in some ways, these teams are mirror images. Look for a close matchup here.

There are a number of options for watching 49ers vs. Panthers on streaming platforms that carry FOX. However, consult a coverage map to see what game your regional channel will be playing.

49ers vs. Panthers live stream: How to watch NFL online

Matt Breida, Running Back: Breida has had some off weeks recently and this is a good defense, but Carolina is soft against bruising runners. Feel comfortable starting Breida this week as this game may be won or lost in the trenches.

Christian McCaffrey, Running Back: No one in their right mind is sitting McCaffrey, but this is just to say we aren’t crazy about anyone else in this offense this week.

San Francisco 49ers vs. Carolina Panthers: Why it matters

This is a hugely important game for both teams. The 49ers are at the top of a tough NFC West, but the Seahawks and Rams could easily overtake them if they slip. Carolina is hoping to catch the Saints as both teams look towards their starting quarterbacks returning to the lineup.

Because the Panthers started the season a little weaker than the Niners, it is tempting to look at these teams as being in different tiers. In reality, you might give Carolina the offensive edge, even if the San Francisco defense is a little better.

While breakout games from stars like Nick Bosa or Christian McCaffrey could change the tide here, on paper, this matchup looks fairly even. Look for a competitive matchup that could be fairly low scoring if both defenses have their way.