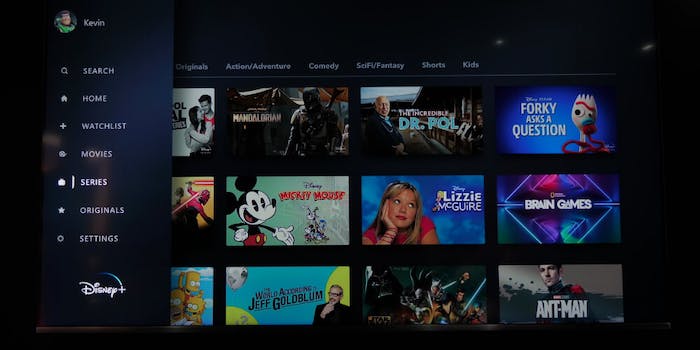 Every big announcement made at D23 about Disney+

We already knew the service would be launching at a competitive rate of $6.99 a month and would feature a huge catalog of content both created and acquired by Disney. But it was announced at the panel that Disney+ is going to include every single film from the Disney Vault, along with every title in the Pixar catalog, and, even better, every Disney Channel series and original movie.

Alongside the anticipated announcements of new Star Wars and Marvel content, we’re also finally getting a reboot with the OG lead.

Here are all the big Disney+ announcements made at D23.

Yes, that’s right. We’re getting a revival of the iconic Hillary Duff show. And the best part is, it’ll still be starring Hillary Duff as Lizzie McGuire. The series will follow 30-year-old Lizzie as an apprentice to a decorator in New York City.

“Lizzie has also grown up, she’s older, she’s wiser, she has a much bigger shoe budget,” Duff said at D23. “She has her dream job, the perfect life right now working as an apprentice to a fancy New York City decorator, the perfect man who owns a fancy restaurant. She’s getting ready to celebrate her 30th birthday.”

This super-meta mockumentary series will be about a bunch of kids at “the real East High” who are putting on a performance of High School Musical.

The series won’t follow the same characters as the Greg Berlanti LGBTQ rom-com, but it is set in the same universe, where a Latino boy named Victor sets off on his own journey of self-discovery.

This TV spin-off of the beloved animated film Monsters, Inc. is reported to be a direct sequel to the movie.

Diary of a Female President

Gina Rodriguez is producing and starring in this series about a Cuban-American girl named Elena who will one day become President of the United States. Rodriguez will provide the voice-over and play the grown-up version of Elena.

Life and Deaf will be a sitcom about a kid growing up in the ’70s with deaf parents.

Sterling Brown (Lieutenant Matthias) and Rachel Wood (Anna and Elsa’s mother) have joined the cast of Frozen 2, which will be in theaters on Nov. 22.

Disney unveiled Emma Stone as Cruella De Vil in Cruella, which will be in theaters on May 28, 2021.

This update of the animated classic will feature the voices of Tessa Thompson and Justin Theroux. By the looks of the newly released trailer, it’s going to be adorable.

Raya and the Last Dragon

Based on the novel by Jerry Spinelli, a homeschooled teen girl starts class at a public high school, shaking things up with her quirky approach to life.

A struggling magician heads back to magic camp to figure out how to save his career.

Anna Kendrick has to save Christmas. ‘Nuff said.

This Willem Dafoe film is about the 1925 Great Race of Mercy, where dog-sled teams raced to bring diphtheria serum to Nome, Alaska.

Phineas and Ferb The Movie: Candace Against the Universe

This follow-up to the kids’ show will see the titular characters traveling across the universe to rescue their sister, even though she might be perfectly happy in her new, brother-less world.

Timmy Failure: Mistakes Were Made

Based on a children’s book series, Timmy Failure follows the adventures of an 11-year-old boy who starts a detective agency with his imaginary friend, a polar bear.

The Eternals cast was unveiled at D23. Most notably, Kit Harington will be joining his Game of Thrones onscreen brother, Richard Madden (GOT’s Robb Stark) in the Eternals as Dane Whitman a.k.a. Black Knight. It was also announced that Gemma Chan will be taking on the role of Sersi. All the actors took the stage to reveal what their characters will look like.

The cast of Marvel Studios’ The Eternals takes the stage at the #D23Expo pic.twitter.com/TR1gYEEq1w

Black Panther 2‘s release date, which was revealed at D23, is May 6, 2022–making it one of the first projects announced for Phase 5.

The Falcon and the Winter Soldier

Anthony Mackie and Sebastian Stan will be reprising their MCU roles in this buddy action-adventure, with Mackie’s Sam Wilson taking up the shield of Captain America. We learned from D23 that Emily VanCamp will be returning as Sharon Carter and Daniel Brühl will be back as Helmut Zero.

Featuring the familiar characters of Wanda Maximoff and Vision, this one sounds like it’s going to get weird. The creators are calling it a combination of an MCU adventure and a sitcom, and they’re bringing back Kat Dennings as Darcy Lewis, Randall Park as Jimmy Woo, and are introducing comedy icon Kathryn Hahn as Wanda and Vision’s neighbor.

Somehow, Loki is coming back to life and getting his own show. And yes, he’s still going to be played by Tom Hiddleston. We’re all curious to see how this one plays out.

Jeremy Renner’s Hawkeye will finally be training up a character that has long been awaited in the MCU, Kate Bishop.

This animated series is basically allowing for fan fiction-esque alternate universes to play out with Marvel characters, with each episode featuring a different possible outcome for an important moment in the MCU.

D23 let us know that we’re also getting three additional Marvel shows—Ms. Marvel, She-Hulk, and Moon Knight—though we don’t know much else about them yet.

The first live-action Star Wars series is set to follow a Mandalorian gunfighter shortly after the fall of the empire. A trailer was unveiled D23.

Star Wars: The Rise of Skywalker

A new trailer and poster were showcased at D23, giving us a glimpse into what the conclusion of the current Star Wars trilogy could look like. Rey (Daisy Ridley) is featured in a Sith robe, wielding a dual-bladed red lightsaber in the trailer.

Check out the new poster for Star Wars: #TheRiseOfSkywalker that debuted at #D23Expo.

This as-of-yet-untitled show, being billed as a spy thriller, will follow Diego Luna’s character Cassian Andor in the time leading up to Rogue One.

Something with Ewan McGregor?? (a.k.a the Obi-Wan Kenobi series)

We know he’s coming back to the Star Wars universe as Obi-Wan Kenobi, but for now, that’s all we know. It’s enough.

While Disney+ plans to offer a whole slew of reality shows and behind the scenes insights into some of the scripted content its creating, here are some highlights.

Kristen Bell is hosting this series that follows adults getting their high school theater group back together to recreate the musical they once put on as teens.

This cooking competition, hosted by The Office’s Angela Kinsey, will feature families creating Disney-themed foods at Disney World. The purest of content.

Marvel’s 616 is a documentary series, exploring the cultural context of Marvel stories.

Something with Jeff Goldblum explaining the world to us. Do we really need to know anything more than that to be sold on this one?

Disney+ is slated to launch on Nov. 12, 2019, though not all of these shows and films will be available right away. Fortunately, we’ll have plenty of DCOMs and Star Wars movies to keep ourselves busy until the full slate is finally available.