Is the ‘Save The Clone Wars’ campaign ready to embrace ‘Star Wars: Rebels’?

The newest Star Wars animated series is a big test for Lucasfilm, and for the fandom.

When Lucasfilm took the stage at New York Comic Con Saturday to show off the upcoming animated series Star Wars: Rebels, it was playing to audience full of hope and trepidation in equal measure.

On one hand, Rebels is set in the nostalgic original trilogy era of Star Wars, considered the peak of the franchise by many fans. But on the other, it’s not The Clone Wars.

Clone Wars, Lucasfilm’s previous animated series, was cancelled five months after Disney bought Lucasfilm in October 2012. Many consider it the best Star Wars offering since The Empire Strikes Back, and its fans are so fiercely loyal that they’ve launched an online campaign to save it.

Those are the fans Lucasfilm was at Comic Con to win over with Rebels. The company had its work cut out for it.

Tucker started the campaign days after the Clone Wars cancellation was announced, encouraging fans to write to Disney and Lucasfilm and spread the message on Twitter and Facebook using the hashtag #SaveTheCloneWars. The campaign has more than 4,500 likes on Facebook, 1,250 Twitter followers, and a current Change.org petition. These fans are not ready to give up hope on a return for The Clone Wars. 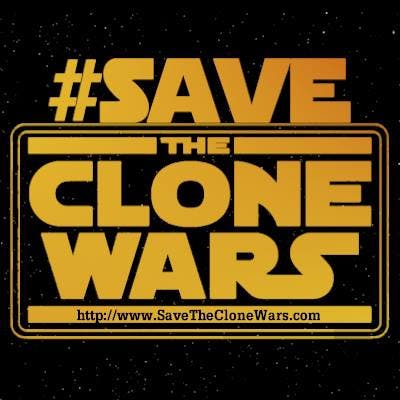 Image via Save The Clone Wars/Facebook

“…There are still many vocal fans who want a proper conclusion to the Clone Wars. Since March, as different groups have organized different campaigns or petitions, we have been spreading the word,” Tucker said.

Mark, another Clone Wars fan at the comic con panel, said he was on board for Rebels, but thinks the fandom lost something important with the Clone Wars cancellation.

“I’m a teacher and a lot of my students were really into Ahsoka and some of the younger teenage characters and that was their Star Wars and I think something’s being taken away from them,” he said.

The Rebels teaser trailer, released right before the convention, gives fans like Mark a ray of hope. In the trailer are heard the words “The Jedi will rise,” leading some fans to believe certain Clone Wars Jedi will make an appearance.

The audience applauded thunderously at the revelation of some brand-new Rebels concept art. So far, so good.

But the question-and-answer portion of the panel revealed that not all elements of the Star Wars fandom are over the cancellation of The Clone Wars.

Panel host Pablo Hidalgo of Lucasfilm fielded some pointed questions about the fates of favorite Clone Wars characters. Although he said he couldn’t reveal who will appear in Rebels, he did offer the audience some grounds for optimism.

“Given the people that are involved on the show and given how many Clone Wars veterans are on the show, there’s a lot of interest in something like that,” he said.

When Clone Wars was originally canceled, a number of episodes were still in production. Those episodes will be finished and offered as bonus content to fans in early 2014, before Rebels premieres in the fall.

Needless to say, it was the announcement Clone Wars fans had been cautiously wishing for.

Fans shared their reactions to the panel and the bonus content news on social media all weekend:

I can only hope that @disney does the right thing and #savetheclonewars and not screw up Rebels.

I was sad when Star Wars: Clone Wars ended… but I’m okay now that Star Wars Rebels is gonna happen!!

The new Star Wars Rebels show is looking very promising! It might be as good as The Clone Wars especially since Dave Filoni is working on it

“I think most of the fans who are still passionate about the continuation of the Clone Wars mostly want closure for key characters like Ahsoka, Darth Maul, Captain Rex, Asajj Ventress, Cad Bane, Hondo Ohnaka and a few others.  Many are hoping closure may come for some of these story lines in the ‘Bonus Content,’” Tucker said.

“I hope that if nothing else, the Save The Clone Wars campaign showed Disney and Lucasfilm how important this series has been to so many people and because of that they gave Dave Filoni and crew extra time to work on as many of the episodes as possible.”

Correction: This article orginal stated that Jimmy Tucker was the creator of the Save The Clone Wars campaign. This isn’t entirely accurate. Tucker explains,

“I started SaveTheCloneWars.com, its Facebook page, and its Twitter account, but if anyone is the creator of the Save The Clone Wars campaign that was Jimmy Mac fromRebelForce Radio. He sounded the alarm, and he was the first, that I am aware of, to encourage fans to write to Disney and LucasFilm to Save The Clone Wars.”