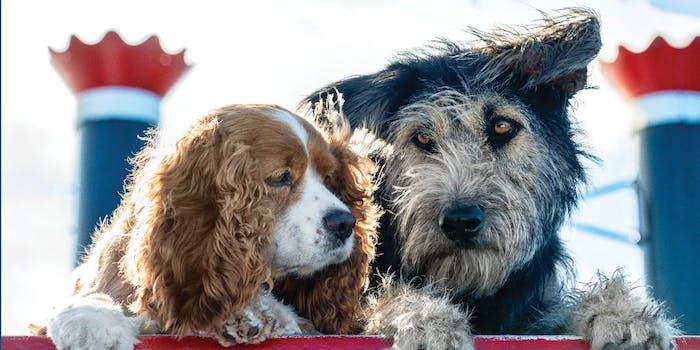 Ahead of the D23 Expo next weekend, Disney twenty-three magazine featured the canine stars of Lady and the Tramp on its cover, giving us an even closer look at one of Disney’s upcoming live-action remakes.

At a glance, there’s not much to go on. It’s literally a photo of two dogs—albeit, two very cute dogs. Lady is portrayed by a Cocker Spaniel whose name is Rose while Tramp is portrayed by a rescue dog named Monte. (Tessa Thompson and Justin Theroux will be voicing the titular duo, respectively.)

JUST ANNOUNCED: Get a first look at the live-action Lady and the Tramp and more Disney magic headed to #DisneyPlus in the latest issue of "Disney twenty-three": https://t.co/hQMdeDsF1Y pic.twitter.com/BlYN4gwAlO

Disney execs briefly showed us what Lady and the Tramp would look like through a title card revealed during an event showcasing what Disney+ had to offer back in April, but it wasn’t until last week that we got our first true look at many of the dogs who will be bringing the film to life; Monte is the only dog who’s labeled as a rescue dog.

Lady and the Tramp’s use of real dogs in the film is a big contrast to The Lion King remake, which featured CG-animated and hyper-realistic animals. We don’t yet have a trailer, so it’s hard to judge how the film will show the dogs communicating with one another, but for now, we know that the dogs will all be good—even if they might be doing something bad.

Lady and the Tramp will debut on Disney+ when the streaming service launches on Nov. 12.