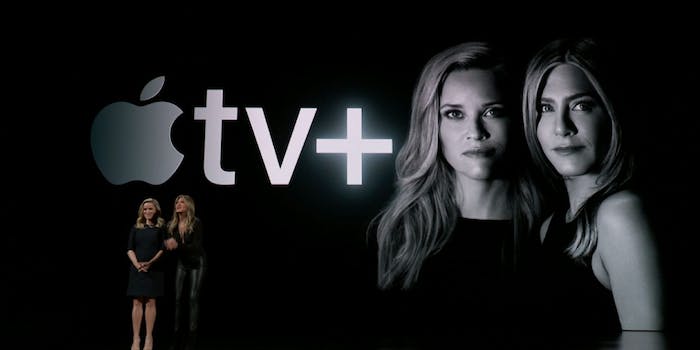 What you need to know about Apple’s new streaming service

Oprah, Spielberg, and more are heading to Apple TV+ this fall.

Apple’s new streaming service was finally unveiled on Monday, with appearances from a few big-name “storytellers.”

During an event streamed from Cupertino, California, CEO Tim Cook announced several new services, including Apple TV+, a streaming video service for original content. Here’s what we know so far.

A new Apple TV app was also demoed, and Apple TV+ will be available through that. It will be an ad-free subscription service, available on and offline, with new additions every month. The Apple TV app will also be added to smart TVs for the first time.

No monthly price was announced, but Apple TV+ will debut in the fall. The TV app’s “channels” feature offers access to Showtime, HBO, Starz, and more. It was confirmed last week that Netflix won’t be part of it.

A game subscription service, Apple Arcade, will offer access to more than 100 original and new games on mobile, desktop, tablet, or TV.

The new Apple News subscription service is titled Apple News+. More than 300 magazines will be added to the service, and subscribers will have access to sites like Vulture and the Los Angeles Times. It will cost $9.99 a month. Apple Card, a branded credit card, was also announced.