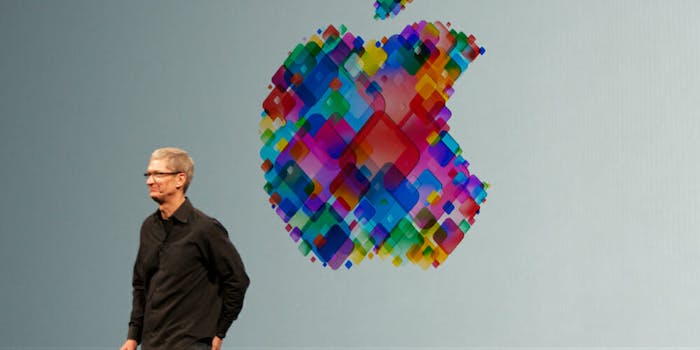 It’s not the first time President Donald Trump has assigned someone a nickname unprompted, and it certainly won’t be the last. Trump on Wednesday referred to Apple CEO Tim Cook as “Tim Apple,” seemingly by accident.

Trump was addressing Cook at an American Workforce Policy Advisory Board meeting when he uttered “Tim Apple” right to Cook’s face. The tech CEO nodded in agreement, without flinching.

Trump had been praising the tech company.

“We have so many companies coming in,” Trump said. “People like Tim, you’re expanding all over and doing things that I really wanted you to right from the beginning. I used to say, ‘Tim, you’ve got to start doing it over here,’ and you really have. I mean, you’ve really put a big investment in our country. We appreciate it very much, Tim Apple.”

It was almost no time at all before the jokes piled up on Twitter.

“How do you like tim apples?” TV writer Joe Randazzo tweeted.

“Please, call me Tim. Mr. Apple is my father,” another joked.

Please, call me Tim. Mr. Apple is my father.

And there were plenty more memes.

Tim Apple on the streets…

Red Delicious in the sheets. pic.twitter.com/KieaY1RuOa

Legally changing my name to Tim Apple to become the CEO of Apple. pic.twitter.com/3uCiTc5ZhB

“Tim Apple” is the contact in your phone for the hot guy who asked you out at the Apple store https://t.co/hzMtl4yaZ8

I JUST HAD LUNCH WITH TIM APPLE! COME IN AND MEET HIM WHEN YOU’RE DONE, BOBBY LAWNMOWER! pic.twitter.com/OaTWdoZ4Tt

20 years ago we had johnny cash, bob hope, and tim apple. now we have no cash, no hope, and no apples.