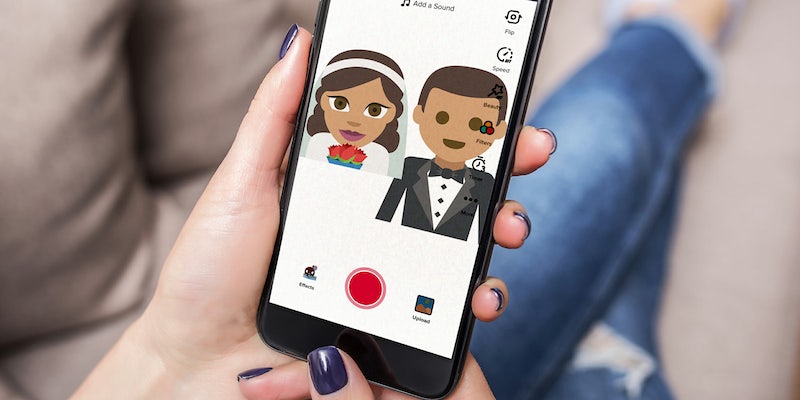 The curious world of divorce TikTok

'Til death do us part' means something different on TikTok.

TikTok, the short-form video and lip-sync app that was formerly Musical.ly, is structured around memes and hashtagged challenges. People engage in goofy, confusing stunts, accompanied by a soundtrack of their choice. But a curious trend has crept in that pokes at the idea of the challenge as well as “engagement”: TikTok divorce.

Last month, Twitter user @Mikaela_wild posted a thread of “underrated” TikToks in which people seem to be working through divorces—and performing as if they were. There are some common threads: Men and women dramatically taking off their rings and throwing them at the camera, or solemnly paging through divorce paperwork. A couple even include ring-tossing onto divorce paperwork.

The most underrated Tik Tok category is when couples who are divorcing or whatever make sentimental vids about it…like imagine you’ve tearfully asked ur husband for a divorce, dropped the kids off @ ur parents, & go online to see your husband posting this on an app for 12 y/o’s pic.twitter.com/8Pbxdh80mI

The divorce filing.. come on pic.twitter.com/0WRxbDGbt9

Quite a few of the videos under the divorce hashtag use the same song: James TW’s “When You Love Someone,” which the singer has said was inspired by a former student’s parents’ divorce. Kristen Kelly’s “Ex Old Man” also features heavily, as does an audio from Grey’s Anatomy. I was surprised that, considering the wealth of audio on TikTok, there weren’t better divorce and breakup songs, though I’m not sure how I’d feel hearing Thee Headcoatees’ “Spineless Little Shit” on TikTok.

Some of these clips contain emotion; there are women and men discussing leaving abusive or toxic relationships. Elsewhere, parents lip-sync with their kids. In one video, a father lip-syncs “When You Love Someone” to his daughter, ostensibly trying to comfort her about an impending or in-progress divorce. Some people mocked these clips for involving kids, but it is a weird grey area. The company that owns TikTok was just directed by the FTC to pay out $5.7 million for violating the Children’s Online Privacy Protection Act and collecting data from children under the age of 13. Though users are supposed to be 13 or older to use TikTok, kids younger than that have still been able to access it or use a parent or older sibling’s account. The National Society for the Prevention of Cruelty to Children recently warned that TikTok is being used by predators to livestream with kids, and it’s reportedly been used to solicit photos from them as well. (And, often, predators look for vulnerable kids going through something like a divorce.)

Other participants in the divorce tag seem to be engaging in some sort of divorce cosplay—they don’t appear old enough to be married but perform the role, including jokes about wanting custody of their non-existent kids. The very first post under the divorce hashtag is a woman explaining how she needs money to get a divorce—no lip-syncing or music. It seems the hashtag has morphed from something more genuine to something more performative—like a lot of things on the internet.

But it also ties into a bigger trend of being “TikTok married” to another user, complete with notebook-written proposals and romantic duets, a kind of shorthand for users who might have crushes on each other. Of course, that leads to getting “TikTok divorced.” One video from user chloe_alice__ announces that unhappy TikTok spouses can visit the “TikTok courthouse” for a quick in-app divorce. She’s not sure where the marriage trend originated—“usually one person has a good idea for a video and then the idea just explodes from there,” she tells the Daily Dot. But it is something unique to TikTok, and beyond TikTok husbands and wives, there are also TikTok parents and siblings. In theory, of course.

The divorce video resonated. Not everyone was happy with their theoretical partners. “I had people left and right commenting they wanted this and tagging their hubbys or wifeys,” she says.

Even real lawyers have figured out a way in, as witnessed by Florida attorney Anthony Barbuto. He tells the Daily Dot he started using the divorce tag “purely to be humorous” but his popularity on the app has also apparently allowed him to give followers advice “about the legal process” and careers in law. Here he speaks to an unseen client in a divorce consultation via 21 Savage’s “A Lot.”

Viral proposal stunts now draw the ire of the internet: Divorce TikTok might be the logical evolution, as the institution of marriage evolves as well. In 2018, data showed that millennials and Gen X are marrying later in life—or not at all—and divorce rates in the U.S. have declined over the last decade. (Though Fortnite is reportedly a new cause of divorce.)

But parts of divorce TikTok also seems to be an extension of the “my wife left me” memes and jokes on Twitter, which are an extension of standup tropes. As Miles Klee explained in a piece for Mel Magazine last year, the meme is gendered—there aren’t that many “my husband left me” jokes—but it also subverts the gender roles: “Instead of dooming a woman to service as comedic prop, they free her from that duty, unchain her from our expectations.” On TikTok, there are quite a few women ripping up wedding photos, taking that ring off their finger and giving him back his last name. Even if it’s performing, it’s some next-level staging.

The TikTokosystem is not one that necessarily nurtures narrative structure or longform story or dramatic arcs. A lot of it is illusory. Does divorce TikTok convey anything deeper about the illusion and fluidity of domesticity, when the trending page currently includes a challenge in which people try to flip pancakes? Engagement has a few meanings on TikTok.