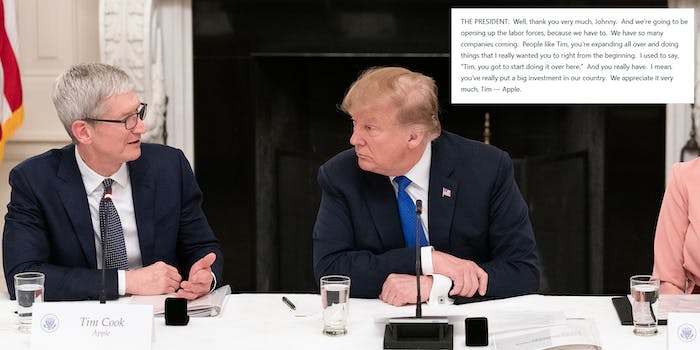 There's something different on the White House transcript.

There’s an interesting difference between what the official White House transcript for President Donald Trump’s advisory meeting says and what people heard when he was caught addressing Apple CEO Tim Cook as “Tim Apple.”

The president appeared to refer to the tech CEO as “Tim Apple” and not his name during a meeting of the American Workforce Policy Advisory Board meeting on Wednesday.

The mishap caught the attention of Twitter users, who heard him say “Tim Apple” and quickly began riffing on the president.

However, the official transcript of the meeting released by the White House says something a bit different. Instead, it insists the president said “Tim—Apple,” as if he were addressing both Cook and the company.

The difference was noticed.

That’s one way to try and save face.