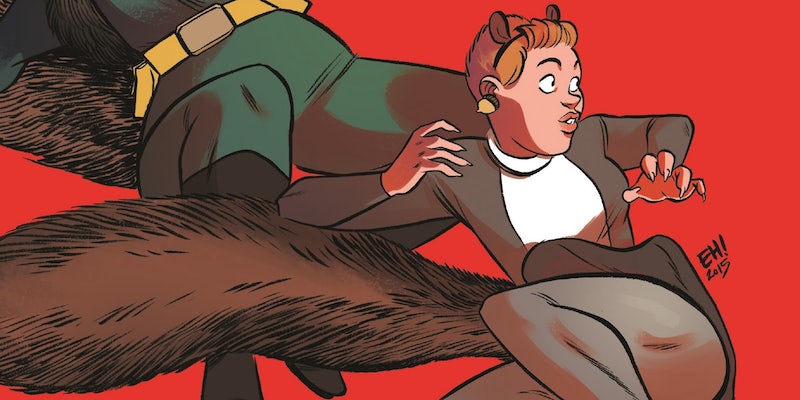 Starring Squirrel Girl, this MCU show filmed a pilot episode in 2017 but never aired on TV.

New Warriors sounded like a refreshing addition to the MCU; a superhero sitcom led by the cult-favorite character Squirrel Girl. Greenlit on Freeform in 2017, the show went as far as casting its main characters and filming a pilot. But despite the pilot’s positive response at test screenings, Freeform dropped New Warriors, stating that there wasn’t room for it in the schedule. The show’s ownership reverted to Marvel Studios, where it was eventually mothballed. What happened?

According to an eye-opening series of tweets from showrunner Kevin Biegel, New Warriors was canceled because it was “too gay.” Describing New Warriors as “very very proudly gay,” Biegel said that “A SINGULAR power that be killed the show,” describing this unnamed executive as “a rich, straight, Brentwood turd” who “got fired for being vile.” The tweets were posted on Wednesday night and deleted Thursday morning.

In a later tweet, Biegel clarified that this executive wasn’t Jeph Loeb, the prolific Marvel producer who was accused of racism on Netflix‘s Iron Fist. All we know is that Biegel blames New Warriors‘ demise on a homophobic man who (probably) used to work at either Freeform, Marvel, or Disney.

It’s not unusual for TV shows to get dropped at the pilot stage. The whole point of a pilot is to see if a show will work. But the situation around New Warriors was weird for a couple of reasons. First of all, the New Warriors pilot earned very positive buzz, with Marvel Entertainment President Dan Buckley saying he was “extremely excited” to find the series a new home in 2018. Secondly, this was a period when Marvel was greenlighting new spinoffs left and right, including the critically-derided Iron Fist and Inhumans.

Biegel also shared a ton of unseen material from behind the scenes, including clips of Squirrel Girl actress Milana Vayntrub filming the pilot, footage of her squirrel sidekick (using puppetry rather than CGI), and numerous photos of the ensemble cast. Vayntrub boosted these tweets to her 212,000 followers, including the accusation that New Warriors was canceled due to homophobia.

“I have nights where I can’t fall asleep because I get so mad we couldn’t have characters say stuff like this,” Biegel tweeted, sharing a quote from a New Warriors script. In the quote, a character (probably the lesbian superhero Debrii) describes herself as “Black. Queer. Powered.”

Starring a cast of quirky C-list Marvel heroes, New Warriors reportedly took inspiration from the Great Lakes Avengers comics and the comedic Unbeatable Squirrel Girl. It’s not the kind of thing you’d expect to see on Disney+, whose new MCU spinoffs are big-budget projects with big-name stars, tying into major events in the movies.

Other Marvel insiders clearly supported Biegel’s “very gay” vision for New Warriors, otherwise it wouldn’t have reached the pilot stage. But after Freeform dropped the show, it’s hard to imagine it finding a home on Disney+. While there are LGBTQ+ characters in MCU-adjacent spinoffs like Jessica Jones and Helstrom, the core franchise is famously lacking in queer representation. It was major news when Loki was revealed to be queer, a detail that was restricted to one brief scene in his Disney+ show. This paved the way for Eternals to introduce the first same-sex couple in an MCU movie later this year. From Biegel’s description, it sounds like New Warriors would have centered on queer characters rather than placing them in secondary roles, which would’ve given it a unique place in the MCU.

Update Sept. 10 6:35am CT: An unnamed Marvel representative told the Daily Dot that New Warriors’ content had nothing to do with its cancelation.