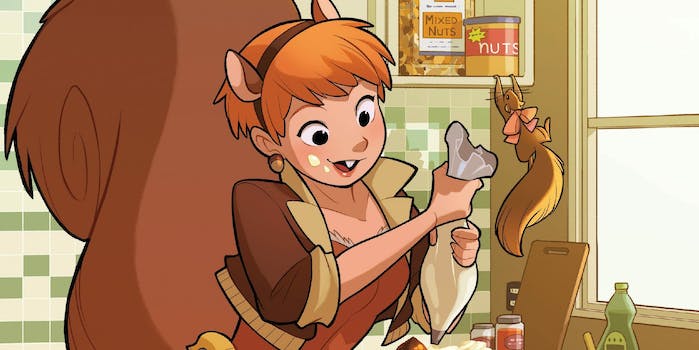 Her relationship with Wolverine is kind of bizarre.

Squirrel Girl is a cult favorite among Marvel fans, and she’ll soon make her live-action debut in a New Warriors sitcom.

Milana Vayntrub, star of This is Us, is now set to play Squirrel Girl in the New Warriors, according to The Hollywood Reporter, making it an exciting time for longtime fans. With her confidence, feminism, and bubbly personality, she seems like a perfect fit for the part.

Armed with squirrel-themed superpowers, a huge fluffy tail, and (of course) some squirrel sidekicks, Squirrel Girl is one of the weirder heroes in the Marvel pantheon. We took a look back through her history and collected some of the most intriguing Squirrel Girl facts.

1) She may be the most powerful hero in Marvel Comics

Squirrel Girl defeated Doctor Doom with an army of squirrels in her first cameo appearance, setting the tone for her comics. By now she’s defeated several of Marvel’s most formidable villains, spawning a running joke that she’s the most powerful character in the Marvel universe. Here she is in the 2009 holiday comic GLX-Mas, defeating M.O.D.O.K. with help from a squirrel sidekick:

She’s also fought and won against Thanos and Terrax, along with some lesser-known villains. Hence the title of her current ongoing comic: The Unbeatable Squirrel Girl. (Plus, there was that one time she persuaded Galactus not to eat the Earth, although that was a triumph of social skills rather than physical combat.)

2) She was Jessica Jones and Luke Cage’s nanny

When superheroes have a baby, it presents a problem: What do they do about childcare? All too often, it means sidelining a female character so she can stay home with the baby. And that really sucks, because superheroes rarely age in real time, so their kids get trapped in eternal toddler-hood.

New Avengers solved this problem by introducing Squirrel Girl to look after Dani Cage, Jessica Jones and Luke Cage‘s daughter. After interviewing dozens of Marvel C-listers, they hired her as their nanny.

3) She hooked up with Wolverine

In the same issue of New Avengers, we learn that Wolverine and Squirrel Girl once had a fling. In a later Wolverine comic, she even shows up in one of his sexual fantasies alongside Emma Frost and Mystique.

This was probably intended as a funny background joke, but it has some sleazy implications. Wolverine is over a 100 years old, whereas Squirrel Girl is typically depicted as a teenager. Did they hook up when she was still underage? This feels pretty out-of-character for Wolverine, who has a long history of being a platonic mentor to young girls in the X-Men comics. Maybe this backstory detail is best left forgotten.

In many ways, Squirrel Girl and Deadpool are polar opposites, but they originated from the same source: the edgy, violent era of ’90s Marvel. Deadpool made his debut in 1991, as a funny and pop-culture-savvy addition to Marvel’s newly gritty lineup. Arriving in 1992, Squirrel Girl was a more obvious contrast as an unabashedly silly character. Here’s what her creator Will Murray had to say:

“It was an age of grueling, gritty mutants, and I wanted to do a story that went back to the early Silver Age of Marvel Comics, where they did a lot of tongue-in-cheek stories that were lighter in the heart than what was going on.”

Squirrel Girl’s comics are full of geeky references and genre-savvy action—a less-violent spin on the formula that made Deadpool a star.

5) Her comic includes one of the few transgender Marvel heroes

Koi Boi is one of Squirrel Girl’s teammates in Unbeatable Squirrel Girl. He fights crime alongside his partner Chipmunk Hunk, and as you’d expect, his powers are fish-related. He’s also trans-masculine and is pictured wearing a binder in issue #9. This makes Squirrel Girl one of the very, very few Marvel comics featuring a trans superhero.

Squirrel Girl and her friends are big social media users, and each issue of Unbeatable Squirrel Girl begins with a Twitter recap of recent events. That’s how we know that Squirrel Girl is on @-reply terms with Tony Stark.

This would be an awesome detail to include in the New Warriors TV show, incorporating the most popular MCU character without requiring an expensive cameo from Robert Downey Jr. But considering the lack of movie tie-ins in Marvel’s other TV shows, it’s unlikely.

7) Her comic revealed a hilarious detail about Wolverine’s claws

Yes, this ridiculous detail is official Marvel canon. It’s exactly the kind of silly joke that couldn’t really happen in an X-Men book but is perfect for Squirrel Girl.

8) Anna Kendrick wants to play her

Squirrel Girl will soon appear in New Warriors, a sitcom about a team of 20-something superheroes. But before that show was a twinkle in Marvel’s eye, actress Anna Kendrick had her eyes on the role. Kendrick’s brother introduced her to the comics, and as soon as fans found out, they fell in love with the idea of her playing Squirrel Girl.

Kendrick is probably too famous for an ensemble sitcom, but another fan-favorite actress already threw her hat into the ring. Shannon Purser (Barb from Stranger Things) looks perfect for the role, and appreciates Squirrel Girl’s nature as a more youthful, fun-loving superhero.

“Squirrel Girl is a little bit younger and like a real person, trying to figure out her life and then also having to save the world,” Purser told Revelist. “I love that.”

9) Squirrel Girl was based on her creator’s ex-girlfriend

Every superhero has to start somewhere, and Squirrel Girl was inspired by writer Will Murray’s ex-girlfriend. (Her other co-creator was Steve Ditko, the iconic Marvel artist behind Doctor Strange and Spider-Man.)

“I based Squirrel Girl ironically enough on a long–ago girlfriend who read comics and was into “critters”—wild animals of all types,” Murray explained in a 2009 interview. “Coincidentally, she was big Ditko fan. I think I got the idea because I had a bunch of squirrels running around my roof and sometimes coming in through my open bedroom window and inspiration struck.”

10) She has her own Avengers team

Squirrel Girl has been in a number of superhero teams over the years, but her home squad is the Great Lakes Avengers. They’re kind of the Z-team of the Marvel universe, with a running joke that the team members are either incredibly obscure or have ridiculous powers. The founding members include such megastars as Flatman and Doorman. Yes, seriously.

When you come across someone with weird powers in the Marvel universe, they’re probably an X-Men mutant or an Inhuman. Squirrel Girl is something else. She has “partially squirrel blood” that allowed her to communicate with squirrels from a young age, but here’s the rub: No one actually knows why.

12) She uses a geeky method to keep track of supervillains

Squirrel Girl has more in common with Deadpool than a love of pop culture and a brief stint together in the Great Lakes Avengers. In recent comics, she uses Deadpool’s genre-savvy trading cards to learn essential info about supervillains. There are more than 4,000 of those cards, and they’re super useful when you want to learn obscure facts like how Doctor Doom “didn’t actually earn his PhD! He’s a fake doctor!” Thanks, Deadpool.

Just in case you mistook Squirrel Girl for a serious superhero for even one nanosecond, this is how she keeps her powers undercover in everyday life: