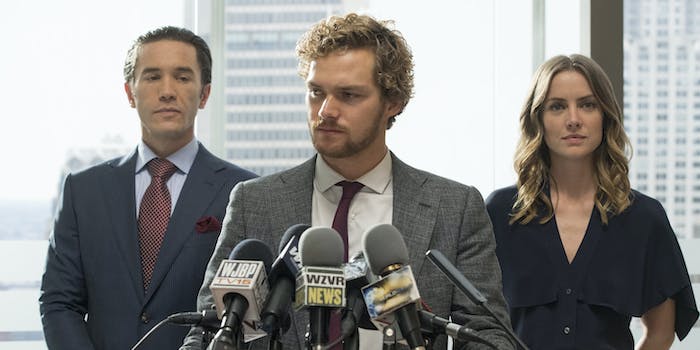 Review: Instead of badass martial arts, ‘Iron Fist’ is mostly about corporate drama

'Iron Fist' fails to live up to Marvel's other Netflix shows. Spoiler-free.

Editor’s note: This review is spoiler-free.

Iron Fist arrives with more baggage than its creators intended. Dogged by accusations of cultural appropriation (was it really a good idea to cast a white man as the protector of a mythical Asian culture?), it’s a show with something to prove. And in the six episodes made available to critics, it doesn’t succeed. Slow-moving and light on action, Iron Fist is a low point for Marvel’s Netflix franchise.

Each of Marvel’s other Defenders series had an obvious hook, like Jessica Jones’ tense examination of rape culture, or Luke Cage’s exploration of black identity and local politics in Harlem. By comparison, Iron Fist feels vacant. With a hero inspired by 1970s kung-fu movies, you’d expect an action-packed martial arts adventure. Instead, it’s a lackluster combination of Daredevil offcuts and corporate drama about rich people with daddy issues.

Finn Jones stars as Danny Rand, a billionaire orphan who was adopted by monks after his parents died in a plane crash. After 15 years of martial arts training in the mythical city of K’un-Lun, Danny earned the title of Iron Fist, a hero whose fist is a living weapon. The show opens with him returning to New York, where the Rand business now belongs to the children of his father’s business partner Harold Meachum (David Wenham). Since Danny is due to inherit a majority share of the company, the Meachums do not welcome him home with open arms.

Despite the familiarity of Danny’s backstory (Batman Begins, anyone?), the show sets him up as a pleasantly atypical superhero. He’s sweet-natured and naive; happier to befriend homeless people in the park than engage with the Meachums’ machinations. Yet while Finn Jones has a likable kind of goofiness, the character is oddly underdeveloped.

Danny Rand embodies the white savior trope in a story that borrows from Asian martial arts cinema while focusing on white American characters. The cast and showrunner have protested this criticism at length, but while the show does include one Asian lead (Jessica Henwick as Colleen Wing), this doesn’t balance out the uncomfortable nature of Danny’s role.

As K’un-Lun’s chosen warrior, Danny fights hordes of anonymous Asian assassins, none of whom have complex motives or personalities compared to the Meachums. Iron Fist’s political dynamic belongs in a Victorian colonial adventure novel, starring a pure, golden-haired hero who wages war against Chinese triads and a mysterious Asian cult.

As a rich white guy who quotes Buddhist philosophers while doing barefoot tai chi, Danny is reminiscent of a trustfund bro who just got home from backpacking in the Himalayas. It’s hard to take him seriously as a superhuman champion, not just because his “warrior” monologues make him sound like a LARPer, but because Finn Jones himself is a newcomer to martial arts. Some of his fight scenes look overly practiced or slow, inviting unflattering comparisons to the more intense action of Daredevil—a show that benefited from starring a mask-wearing hero who was easier to swap for a stunt double.

Netflix dramas are designed for binge-watching, but even by Netflix standards, Iron Fist is glacially slow. In the first six episodes, there’s about three episodes’ worth of plot—and most of it belongs to the Meachums. The rest is split between Colleen Wing’s story, and Danny’s conflict with the criminal organization known as the Hand, who are just as two-dimensional as they were in Daredevil.

Every hero needs a worthy villain

The Hand are Marvel’s Netflix equivalent of Thanos, a supervillain with a significant ongoing role but no onscreen character development. Even after two seasons of Daredevil, they’re little more than an army of nameless assassins, controlled by the wryly enigmatic Madame Gao. Daredevil offset this problem by including compelling antagonists like Wilson Fisk, but the Meachums just aren’t on Fisk’s level.

Tom Pelphrey gives a strong performance as the obnoxious and miserable Ward Meachum, Harold’s son and the new boss of the Rand empire. Shaped by his controlling, macho father, Ward is an avatar of toxic corporate ambition, embittered by the knowledge that he’s still subservient to Harold’s commands. His sister Joy (Jessica Stroup) is more likeable, torn between her loyalty to the company and her affection for Danny. The result is a triangle of unbalanced alliances, where Joy acts as an intermediary between Ward’s cruelty and Danny’s inherent goodness, complicated by a classic sexist cliché: The men must keep a huge secret from Joy “for her own good.”

By placing the Meachums in a central role, showrunner Scott Buck (Dexter) turned Iron Fist into a chilly boardroom drama about business tycoons. This might have worked if Danny returned home to a slick, fast-paced setting like The Good Wife or Dirty Sexy Money, but Iron Fist doesn’t have that kind of energy. It’s mostly about rich people being nasty in minimalist offices, with occasional breaks for Danny to run away and punch someone.

Speaking of running and punching, Colleen Wing is a welcome break from the sterile world the Meachums. Loosely adapted from the 1970s heyday of the Luke Cage/Iron Fist comics, she’s a martial arts teacher who runs a dojo in a rough neighborhood, accidentally becoming Danny’s first new friend in New York. Framed as a street-savvy alternative to Danny’s mysticism, Colleen’s struggles are more relatable than Danny’s choice between being incredibly rich or being the hero of K’un Lun. Her brief team-up with Claire Temple (Rosario Dawson) feels like a callback to a spinoff show that never existed. A better show, where characters actually enjoy each other’s company.

Basically, Iron Fist isn’t much fun to watch. It suffers from the peculiar assumption that “serious” superhero adaptations should focus on realistic topics and gradually ease into the weirder aspects of their comic book origins. Why bother, though? Why not include more scenes with Danny’s powers? Where are the cool stunts? Where’s K’un-Lun? If you want to watch a drama about cutthroat businessmen, there are plenty of other options. Iron Fist ought to involve more actual Iron Fist, but instead it’s just a stale imitation of Daredevil.