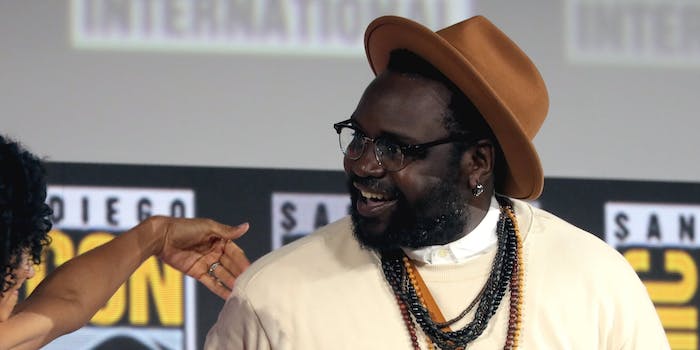 The Eternals is set to be the first MCU movie with a gay superhero in the main cast, but for a long time that hero’s identity was under wraps. Now Eternals actor Haaz Sleiman has spilled the beans, revealing that he plays the husband of Brian Tyree Henry’s character Phastos. Previously there was widespread speculation that the gay character would be the lead, Richard Madden‘s Ikaris.

Speaking to NewNowNext, Haaz Sleiman said, “we represent a gay family and have a child.” This lines up with earlier reports that the film would feature a gay superhero with a husband and child, and that Marvel was looking to cast an openly queer actor or actors. Sleiman came out as gay in 2017.

Sleiman also said he filmed a “beautiful, very moving kiss” that made everyone cry on-set. “For me, it’s very important to show how loving and beautiful a queer family can be,” he said. “Brian Tyree Henry is such a tremendous actor and brought so much beauty into this part.”

While queer and transgender characters have appeared in the MCU’s TV spinoffs, the only openly queer character in the movie franchise was the now-infamous cameo from co-director Joe Russo in Avengers: Endgame. The character was so minor that a lot of viewers didn’t even remember he existed, nevermind that he briefly mentioned going on a date with a man. Much like the millisecond-long lesbian kiss in The Rise of Skywalker, it was seen as a textbook case of Hollywood studios trying to make a big deal out of a moment so tiny that it shouldn’t be labeled as groundbreaking. The Eternals will be a different situation because Phastos is a member of the film’s main superhero cast.

We don’t know who Sleiman is playing, other than Phastos’ husband. If he’s another Eternal then he might have a relatively prominent role, although the movie already has a pretty extensive ensemble cast. If he’s a human who stays home with their child or has a civilian job, he’s more likely to have a similar role (and screentime) to Hawkeye’s wife in the later Avengers movies.