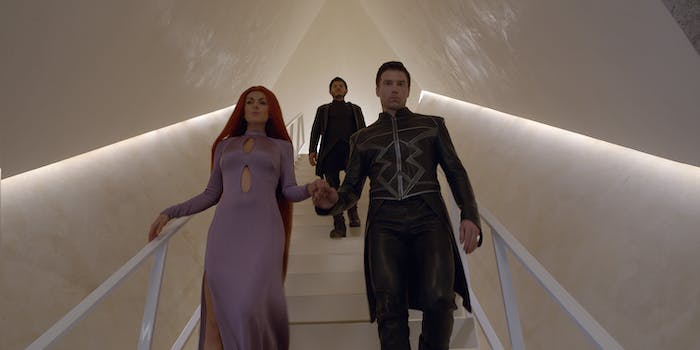 There are literally no good points to the show.

It goes without saying that Inhumans has poor production values, but the truly shocking part is the writing. In a show where one character is defined by her unconvincing CGI wig, that’s an impressive feat. Somehow, showrunner Scott Buck wrote a script even worse than Iron Fist.

Inhumans is sci-fi written by someone who doesn’t understand or enjoy science fiction. Abandoning the melodrama and epic fantasy of the Inhumans comics, Scott Buck reimagined them as a dull and over-explained family drama, restricted by limited imagination and money for visual effects. The production design doesn’t help, depicting the Inhumans’ “alien palace” in grey concrete with minimalist IKEA furniture.

Hidden beneath layers of cheap costumes and amateurish dialogue, you can detect hints of a good idea. Ruled by the king Black Bolt and queen Medusa, the Inhuman civilization hides itself on the moon, avoiding the potential for a war with humankind. They follow a strict caste system according to their superpowers, with non-superpowered citizens consigned to work— where else?—in “the mines.” Black Bolt’s brother Maximus is un-powered himself, and leverages this social tension to launch a rebellion, stranding Black Bolt and his allies in Hawaii. Sadly, even Marvel fans may struggle to care about either side in this conflict. The “heroes” are arguably in the wrong, while Maximus is a charmless shadow of Thor‘s Loki. Also, every single character is an idiot.

Even verifiably good actors like Iwan Rheon (Maximus) and Ken Leung (Black Bolt’s advisor Karnak) are hopeless in the face of Buck’s godawful writing. Every line is painfully obvious and stilted, without an ounce of emotional authenticity. “Hello, I’m Medusa,” says Medusa, in a brief flashback to her childhood with Black Bolt. “I know everyone’s afraid of you, but I’m not.” It’s the verbal equivalent of delivering a hastily drawn storyboard instead of an actual film.

Black Bolt, who is functionally mute, presents an interesting challenge for a show with such terrible dialogue. How do you make him as poorly written as his compatriots? Fortunately, Buck is on the case. Instead of having Black Bolt communicate in text or by subtitled sign language, he uses brief hand gestures that (apparently) only Medusa can translate. She essentially has the same job that Sigourney Weaver parodied in : a female lead who just repeats someone else’s words to the audience.

Once Black Bolt and Medusa are stuck on Earth, this only gets more frustrating. If the Inhumans can make phonecalls between Earth and the moon, why can’t Black Bolt send a damn text message? Why doesn’t he communicate by writing things down? Why don’t his subjects and advisors also speak sign language? There are so many obvious workarounds to this problem, and it’s not the only time Inhumans relies on manufactured conflict. Take the giant, teleporting dog, Lockjaw.

Look, it’s hard to go wrong with a giant magical dog. By the laws of TV, Lockjaw should be the most lovable character on the show. But instead of depicting him with a cute personality like Appa in Avatar: The Last Airbender, we only see Lockjaw when the royal family uses him as a tool. When Maximus overthrows Black Bolt, the good guys use Lockjaw to escape. Obviously! So why didn’t Maximus disable Lockjaw before launching the coup? To make matters worse, Lockjaw’s main caretaker has another one of those “Sigourney Weaver in Galaxy Quest” roles. Medusa’s sister Crystal has some kind of superpower (it’s honestly unclear), but her main job telling Lockjaw what to do.

I’d say Inhumans was sexist for putting such little thought into its female leads, but it’s not like the men fare much better. Karnak is supposedly a wise politician and strategist, but one of his scenes involves him creepily hitting on a waitress, and another consists of him wandering around saying, “My king! I need to find my king!” out loud, as if we couldn’t work that out ourselves.

With its horrible writing, shoddy effects, and budget cosplay costumes, it’s hard to understand why Inhumans is even on TV, never mind getting a high-profile IMAX release. Imagine if Marvel had spent this much hype on the delightful Agent Carter! Is it possible they had to make Inhumans for some reason? Was it a tax thing? Was Marvel too embarrassed to cancel it after making the announcement? Did Buck hypnotize some TV execs into believing he’s good at his job? Maybe Marvel needs Inhumans to introduce an important new facet to the MCU—either the Inhumans themselves or the Kree, an alien race who will play a major role in future movies. But the poor, overlooked Agents of S.H.I.E.L.D. already did both, so maybe I’m just grasping at straws. We must accept that Inhumans is straightfowardly bad, and Marvel allowed it to happen. If you spend money to watch this at IMAX, you only have yourself to blame.