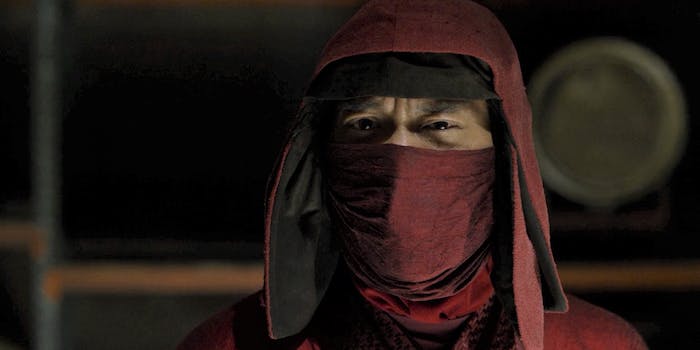 In the midst of Comic-Con’s first attempt at an online-only convention, a couple of other fan events offered some interesting counterprogramming: Zack Snyder’s Justice Con and, somewhat surprisingly, a Zoom panel for the Daredevil renewal campaign.

Shinkoda played the secondary villain Nobu in 9 episodes of Daredevil, a key member of the evil ninja organization known as the Hand. During this weekend’s YouTube panel, he said Loeb scrapped an idea for Nobu and Madame Gao (another recurring villain) to receive more fleshed-out roles.

“Jeph Loeb told the writers room not to write for Nobu and Gao…and this was reiterated many times by many of the writers and showrunners,” said Shinkoda. He also quoted Jeph Loeb as saying, “Nobody cares about Chinese people and Asian people. There were three previous Marvel movies, a trilogy called Blade that was made where Wesley Snipes killed 200 Asians each movie. Nobody gives a shit so don’t write about Nobu and Gao.”

Recently we’ve seen an uptick in actors reporting unprofessional and discriminatory behavior from powerful Hollywood figures, often after years of staying silent due to concerns about professional retaliation.

If you watch the clip where Shinkoda talks about Loeb’s alleged behavior, he seems conflicted but ultimately decides to speak out. He also said that some of Daredevil‘s writers had developed an entire storyline for Nobu and Gao and were “very apologetic” that they weren’t allowed to include it.

This allegation about Loeb is supported by what we saw in the show itself. Daredevil was routinely accused of giving shallow roles to Asian characters, many of whom were ninjas or gangsters with minimal characterization.

Back in 2016, our own review criticized season 2 for sidelining Asian antagonists while giving meatier roles to their white counterparts in the Irish mob. Nobu was an obvious example because he had a recurring role but had very little characterization or backstory.

His death was also bizarrely dehumanizing compared to the treatment of white villains. One of the show’s central themes is Daredevil’s moral code and Catholic guilt, refusing to kill criminals like Wilson Fisk. However, he kills Nobu without remorse in season 1, accidentally burning him to death during a fight scene. Nobu is resurrected in season 2 and then Daredevil kicks him off a ledge to his second onscreen death.

Jeph Loeb is a prolific comic book writer, screenwriter, and producer. He was the executive vice president of Marvel TV from 2010 to 2019. He was also one of the driving forces behind Marvel’s Netflix franchise, in which Daredevil and Iron Fist (particularly Iron Fist) were repeatedly criticized for their poor depiction of Asian characters.

During a 2018 Comic-Con panel to promote the already-controversial Iron Fist, Loeb donned a karate outfit and headband; a tone-deaf and quite frankly baffling moment that reportedly ended with Iron Fist actress Jessica Henwick telling him to take it off.

Iron Fist and Daredevil comics both draw inspiration from 1970s kung-fu media, placing a white hero at the center of a martial arts-based thriller with ninjas and Chinese triads among the villains.

Marvel’s Doctor Strange movie echoes many of the same ideas and was also roundly criticized for its casting choices and treatment of Asian characters.

The more we learn about the people in power at Marvel, the clearer it becomes that there appears to be an institutional issue. While Jeph Loeb announced his plans to step down last October, Marvel’s editor-in-chief is still C.B. Cebulski, a white man who fabricated a Japanese persona in order to circumvent Marvel’s editorial guidelines and publish supposedly “authentic” comics about Asian characters.

Next year’s Shang-Chi and the Legend of the Ten Rings will be the first Marvel Studios movie starring an Asian protagonist, with an Asian-American filmmaker at the helm.