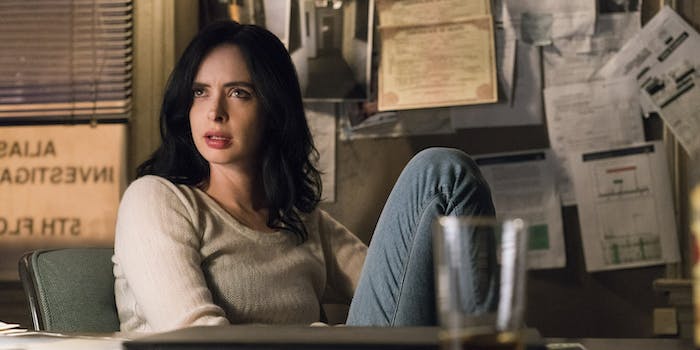 ‘Jessica Jones’ gives us another season of must-watch TV

This review is spoiler-free for Jessica Jones season 2.

After a period in purgatory with Iron Fist, Punisher, and The Defenders, it’s a relief to return to Jessica Jones. Marvel’s recent Netflix shows ranged from overlong to downright unwatchable, whereas Jessica Jones is straight-up great. Krysten Ritter is as sympathetic as ever as the sharp, antisocial private investigator, in a gripping follow-up to season 1.

There was some concern about whether Jessica Jones could thrive without its original villain, the terrifying Kilgrave. Season 2 quickly proves this was never a problem at all. Jessica Jones isn’t really a superhero story, it’s a detective show. They don’t need to introduce a new supervillain in the first act, because Jessica’s job is to find out who the villain actually is. Encouraged by her friend Trish (Rachael Taylor), Jessica decides to investigate how she got her powers. This leads her to a mysterious research facility (what else?) and some forgotten secrets from her past.

With Kilgrave gone, Jessica’s other problems come to the foreground. She’s still an alcoholic; still a careless friend who tries to distance herself instead of asking for help. Her superpowers are more often a hindrance than a help, attracting police attention and exacerbating her hot temper. The show’s tense atmosphere doesn’t come from physical threats but from the violation of social boundaries.

Jessica is an inherently stress-inducing protagonist, gatecrashing funerals and bulldozing through sensitive conversations. She constantly finds new ways to screw up, and unlike the alleged charm of someone like Sherlock, she always gets punished for her transgressions. Fittingly, her enemies are at their most frightening when they threaten her emotional wellbeing. In that sense, she has a lot in common with Luke Cage, another hero whose powers only go so far. Their vulnerabilities are more relatable than kryptonite: the powerless feeling of being stalked or being unable to defend yourself in an unjust system.

Everyone in Jessica’s world is a walking disaster. Her own problems are obvious, while Trish—a child star turned radio host—is one of those women who seems superficially put-together, but has major issues brewing beneath the surface. She still can’t resist her abusive mom’s clumsy manipulations, and despite her firsthand view of Jessica’s chaotic life, Trish envies her independence and physical strength. Ruthless lawyer Jeri Hogarth (Carrie-Anne Moss) is in a similar boat after last season, toppled from her pedestal of professional success. She’s more than just a side character now, embarking on an unexpected road to self-destruction. The only person who has their shit together is Trish’s new boyfriend, Griffin, which makes him an immediately suspicious addition to the cast.

Hal Ozsan gives a standout performance among season 2’s new characters, playing Griffin as a very specific kind of English charmer. He’s a celebrated journalist, suave and cocky in a way that makes you wonder if he’s remotely sincere. Is he truly a supportive boyfriend, or is there a hint of condescension when he shares professional advice with Trish? This show is nothing if not paranoia-inducing. We have to remind ourselves that charm isn’t an inherently negative quality. It’s just an unwelcome trait in Jessica’s world of blunt talk and pervasive suspicion.

Written before the Weinstein scandal, we get a timely subplot about an abusive film director. It’s both prescient to the #MeToo movement, and a convincing argument for the show’s predominantly female creative team. Rape and domestic violence are common themes in female-led thrillers, routinely depicted with no understanding of structural sexism. Jessica Jones is a welcome twist on the rape/revenge genre, rolling its eyes at “strong female character” clichés. In some ways it reminds me of Jane Campion’s mystery series Top of the Lake, albeit less soul-destroyingly traumatic. These writers understand that sexual violence is commonplace and survivable, inspiring different effects on different people.

Of course, if Jessica Jones invites serious discussion about gender and rape culture, we can’t ignore where it falls short. As is often the case, this show “about women” is actually about white women. That was true in season 1, and it’s even truer in season 2, where the story focuses squarely on Jessica, Trish, Jeri Hogarth, and a new character played by Janet McTeer. Malcolm (Eka Darville) has a central but rather passive role as Jessica’s long-suffering sidekick, while Jessica shares her B-plots with a new neighbor (J.R. Ramirez) and a rival detective (Terry Chen). Women of color still only appear in tertiary roles.

Showrunner Melissa Rosenberg hired only female directors this season, following in the footsteps of Ava DuVernay‘s Queen Sugar. It’s an effective statement about the link between ethical hiring and artistic quality. Game of Thrones famously hired just one woman director in eight seasons, and Jessica Jones squares off in opposition. It debunks the idea of feminist critique as modern-day puritanism. Sex and rape both have a role in Jessica Jones; they’re just filmed from a different angle. We see rape culture via its impact, rather than the act of rape displayed onscreen. As for consensual sex, it’s plot-relevant rather than an excuse to see some boobs. (Altered Carbon… I’m talking to you.)

At one point we see an all-female orgy including a striptease; something that most TV shows would include for pure titillation. Filmed with thoughtful characterization and a notable lack of leering camera-work, it has a different role in Jessica Jones. The scene has nothing to do with men, so it isn’t contaminated by the male gaze. But the camera isn’t always such a neutral witness. Instead of passively watching the action, the show often forces us to experience the sensation of surveillance. Amping up the suspense, we view Jessica’s exploits from the shadows. There’s a horror movie sense of an enemy lurking just out of sight, waiting for the right moment to attack. Kilgrave may be gone, but the hypervigilance remains.

In the five episodes made available to critics, the season’s true villain hasn’t fully emerged. This seems like a smart choice after Kilgrave, who was so unambiguously hateable. Jessica’s life is too messy for a simple hero/villain binary like Daredevil, so it’s better to keep us guessing. Smart and tightly paced, that mystery keeps Jessica Jones feeling fresh in its long-awaited second chapter.