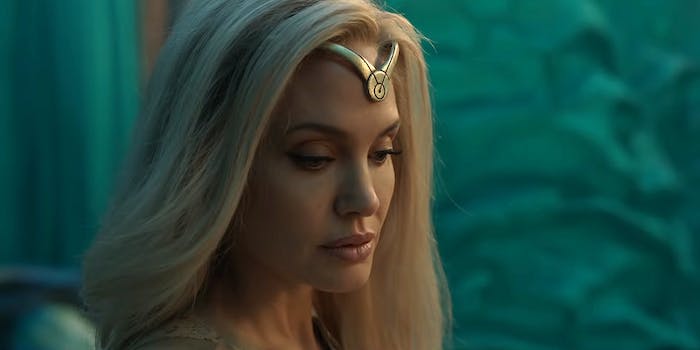 Why did Marvel's new superheroes ignore 7,000 years of human tragedy?

The first Eternals trailer is pretty enigmatic, but it does introduce new fans to the basic concept of the film: The Eternals are a group of immortal, superpowered aliens who settled on Earth thousands of years ago. And they chose not to interfere in human affairs… until now.

That “until now” thing is kind of a head-scratcher because it introduces a silent question hanging over the film’s head. Why did these heroes ignore 7,000 years of genocide, war, and natural disasters, including Thanos killing off half the world’s population? It doesn’t seem to be a King Arthur situation where they just took a really long nap. They just decided it wasn’t their place to interfere.

This is an unavoidable problem when telling a story about immortal characters and/or a secret civilization living alongside our own. In Wonder Woman, the Amazons were physically secluded from the rest of the world, with Diana choosing to leave the island of Themyscira during WWI. In the Old Guard comics and Netflix movies, the immortal heroes secretly fought in numerous wars throughout history. Meanwhile, the Minions franchise found a tongue-in-cheek explanation for why the Minions didn’t team up with real 20th century villains like Hitler. They were frozen in an ice cave from 1812 to 1968.

We can’t judge a full movie based on its trailer, but The Eternals’ writers may have an uphill battle on their hands here. While audiences will happily suspend their disbelief for fantasy concepts like magic and immortality, we have a different response to real historical events. The initial conflict of The Eternals will touch upon something like Star Trek‘s Prime Directive (Should a powerful, high-tech civilization interfere with someone else’s cultural development?) writ large over the course of human history. That means they’ll have to find a very good explanation for why this is the right moment for the Eternals to take action.