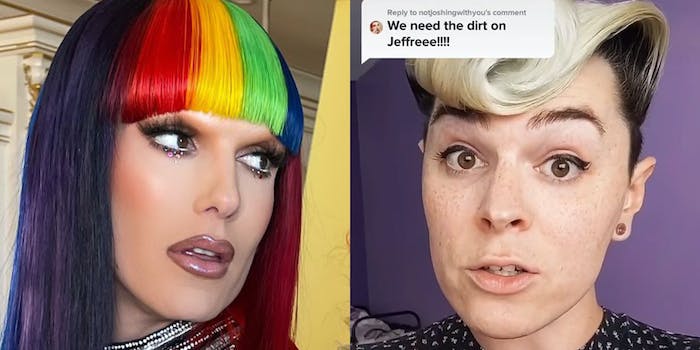 TikToker claims they once got Jeffree Star booted from Neopets

The internet has been around long enough that chances are, many of us probably encountered someone famous before they made it big. But one TikToker is claiming that not only did they encounter a famous and controversial influencer, but they may also have been responsible for getting someone kicked off a popular website.

On Wednesday, @dusty.drake, who has more than 17,000 followers on TikTok and was in a story-sharing mood, posted a video and asked their followers to pick between two stories: A story involving Jeffree Star, the controversial beauty guru, before he got famous; or an ex who once tried to summon the devil.

While devil summoning certainly held sway with some commenters, more people were interested in learning something about Star.

In two TikToks, @dusty.drake relayed a story about encountering Star on Neopets’ forums when they were between 15 and 17 years old. They remembered the post because it was eye-popping and bursting with color.

“So I read the post, and it’s just about this person talking about how they want to become a model and they’re really just trying to get their foot in the door and wanted people to go to their profile and check out their pictures.”

According to @dusty.drake, Star was wearing “stiletto heels, fishnets, and a thong, just working his twinkie self around a pool.” They described themselves as a goody two-shoes and a tattle tale at the time and messaged Star about the photos.

“I messaged him and I was like, ‘Just so you know, you can’t have all these pictures of you and your underwear on Neopets. This is a kids’ website and what you’re showing is not appropriate,’” they said. “He sends me back this message of something along the lines of like, ‘Yeah, and I don’t care about your opinion.’”

@dusty.drake does concede by noting that they were “totally being a Karen” about Star’s photos. But because Star didn’t take down the photos, @dusty.drake reported Star’s account, which was eventually deleted, and they didn’t really think about it until years later when Star became famous.

It’s a story that’s full of several fascinating factors. It features Star, who had his sights on fame. It featured an alleged interaction filled with dismissal, alongside petty revenge. And it took place on Neopets, the kind of website that holds a level of nostalgia for a certain part of the internet. It’s not a claim to the level of Star’s other controversies, which include old racist videos, lying about not knowing about sexual assault allegations, or allegedly paying off someone who accused him of sexual assault.

But if the story is nothing more than that, it wouldn’t even be the first time that someone made up a story about Star. Earlier this year, a TikToker claimed that Star and Kanye West were having an affair. Star made a video denying the rumor while the TikToker eventually walked it back and admitted that she made it all up.

We’ve reached out to a representative for Star.