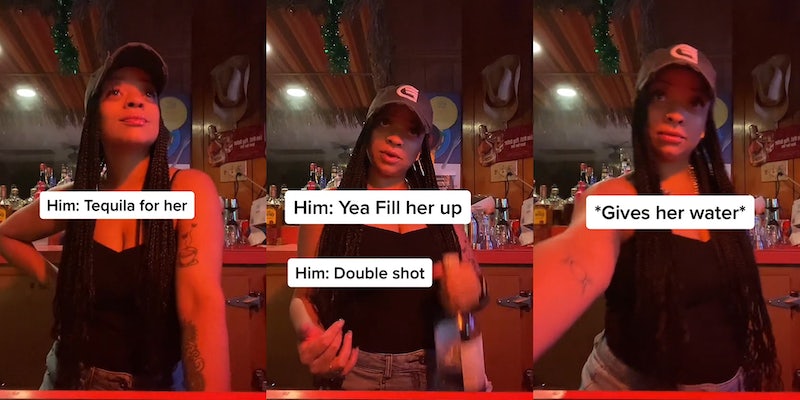 ‘Fill her up’: Bartender gives woman a glass of water when the man she’s with orders tequila shots

'Is that what YOU want to drink?'

In a viral video surpassing 8 million views, TikToker and bartender Rise (@iamrisejumeade) demonstrated a situation at the bar that she sees often: Men taking advantage of women.

Rise recreated an interaction where the man asked for a double shot of tequila for the woman he was with.

“Him: yea fill her up,” the overlay text on the video said. Rise hesitated after the man asked for a double shot; her body language in the video conveyed that she was suspicious of the interaction.

She carried on making the shot as she normally would and revealed that she gave the woman water instead.

In the comments section, users praised the bartender and appreciated that she watches her customers’ body language and facial cues.

“Can you explain?” one user asked, to which Rise replied, “Men will fill womens cups up to get them drunk to take advantage.”

“Once I taste that water I’m saying I gotta go but have fun,” another used said.

“I always look at the girl, and only her and say ‘is that what YOU want to drink’ completely ignore the guy,” a third user commented.

However, some users joked that the woman may have actually wanted the tequila shot. Rise clarified in the comments section that she always makes sure the woman confirms.

The Daily Dot reached out to Rise via Instagram messaging.