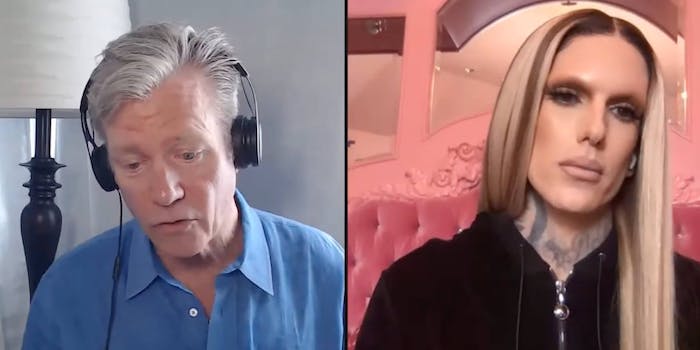 Jeffree Star said he had no previous knowledge about accusations against the Blood On The Dance Floor singer.

In an interview with “To Catch A Predator’s” Chris Hansen, makeup artist and singer Jeffree Star answered questions about sexual assault allegations against his previous tourmate Dahvie Vanity.

In the recent interview, Star claimed to have no knowledge of any inappropriate activity between Vanity and underage girls while they were worked together. Screenshots of deleted tweets, however, show Star calling Vanity “lowest worthless scum” and a “child molester” in 2010.

Tweets dated after that show Star telling people to “get over the negativity” and promoting an album from Vanity’s band, Blood On The Dance Floor.

“We’re talking about a very serious subject, and this person needs to go to jail,” Star told Hansen in the interview. “Don’t use me to distract from the victims, and the justice that they need, and putting this person away.”

Nearly 10 years after the two were on tour, at least 21 women have accused Vanity of sexual assault and rape. An investigation from the Huffington Post revealed that Vanity allegedly committed a form of statutory rape in Florida, but the victim did not pursue legal action.

In a separate report from MetalSucks, a deleted tweet from Star declares first-hand knowledge of Vanity’s alleged activities with underage girls.

“I’m gonna speak the truth til I die,” Star wrote in the now-deleted tweet. “We saw @botdfmusic Dhavie bring underage girls to his hotel rooms an do sexual things. 100% ILLEGAL.”

These tweets, coupled with Star’s responses to questions from Hansen, prompted some serious backlash from people online. Many believe Star changed his story because he stood to make money from Vanity’s continued success.

“Okay so lemme get this straight, Jeffree baby,” Twitter user @tychekoo wrote. “You seriously can not expect us to believe after everything that happened and Dahvie was exposed for you are supporting that disgusting piece of shit to this day.”

Hansen announced that his show, “To Catch A Predator,” will be investigating allegations against Vanity.