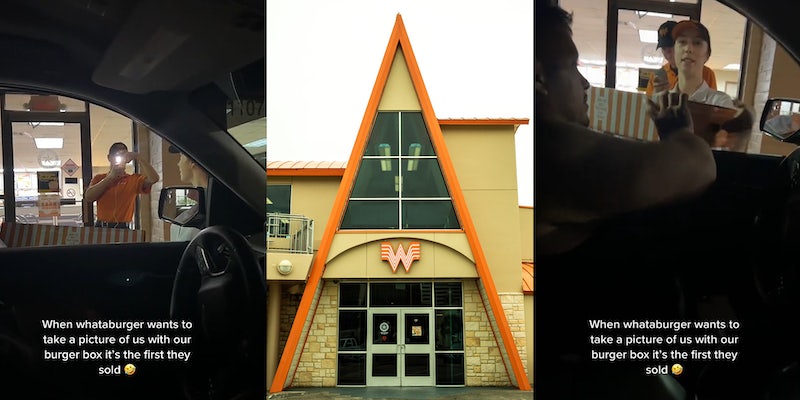 ‘I don’t think my store has even sold one’: Whataburger employees take picture with first customer who bought a burger box

'I've lived in Texas my whole life and have never seen or heard of a burger  box.'

In a viral TikTok video, a woman records Whataburger employees taking a picture of her for being the first customer to purchase a Whataburger burger box.

The nine-second clip shows a Whataburger worker standing outside the drive-thru and taking a picture of user Lasey Breann (@laseybreann) and the driver, with two other workers holding the box of burgers.

“When whataburger wants to take a picture of us with our burger box it’s the first they sold,” Breann wrote in the text overlay.

In the comments, the TikToker added that this took place at a Whataburger location in El Paso, Texas.

Whataburger has stores in 14 states, however, the chain is based in Texas. The Whataburger box, a new item that launched Aug. 1, allows customers to build their own burgers, consisting of ten patties and buns, add-ons, and condiments. The box, which is available at all locations, runs for $45.99 with single patties and no extras.

The video has been viewed 2 million times as of Saturday, receiving attention from viewers who were purely shocked by the new addition to Whataburger’s menu.

“Wait I’ve lived in Texas my whole life and have never seen or heard of a burger  box at whataburger,” one user wrote.

“Wait wait wait they sell a burger box now. where is this located or is it all of them,” a second echoed.

Breann reveals the inside of her Whataburger box in a follow-up video for those curious viewers.

However, some alleged Whataburger employees related to the video, noting that they haven’t had luck in selling the burger boxes yet.

“I don’t think my store has even sold one,” one person stated.

One user claimed the employees at their local Whataburger weren’t aware of the new item after they tried to order a burger box. “Where is this, college Station whataburger looked at me like I was crazy when I asked for it,” they wrote.

Others speculated as to why the employees had to capture the moment on camera.

“It’s [corporate] making them do it they in competition with other stores,” one user suggested.

“Maybe they couldn’t believe some one actually bought it,” another wrote.

“My mom had her picture taken at my local Taco Bell bc she was the first to order the Mexican pizza when it came out again,” a third said, noting that Whataburger isn’t the only fast food chain to commemorate their first sales.

The Daily Dot reached out to Lasey Breann via TikTok comment, as other methods of contact were unavailable.