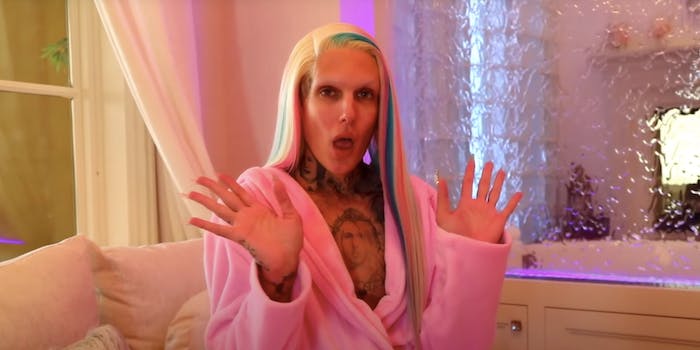 Morphe drops Jeffree Star from its brand amid controversies

Jeffree Star is getting called out for old racist videos.

The makeup brand Morphe announced on Twitter their decision to drop Jeffree Star, as well as his brand Jeffree Star Cosmetics, from their brand.

This announcement comes amid growing criticism against him and collaborator Shane Dawson, who was also dropped from the brand last week.

“Today we’ve made the decision to cease all commercial activity related to Jeffree Star and affiliated products,” the brand writes on Twitter. “We expect this to conclude within the coming weeks. As we look to the future, we will continue to share updates on what lies ahead for the Morphe brand.”

Star and Dawson have been subject to a firestorm of criticism over the past couple of weeks. People have long criticized Dawson for old videos of him saying the N-word and dressing up in blackface. But his comments sexualizing a then 11-year-old Willow Smith have resurfaced and caused Morphe, as well as Target, to officially drop him. They announced they would no longer be selling his book.

Star has also come under fire in the past for making racist statements and using the N-word on camera. More recently, he was called out for releasing a palette called Cremated in the midst of a pandemic. He also apologized for an older picture of himself that’s called “Lipstick Nazi.” The picture shows him in lipstick with a swastika emblazoned next to him.

Star has yet to make any public statements addressing being dropped from the brand.