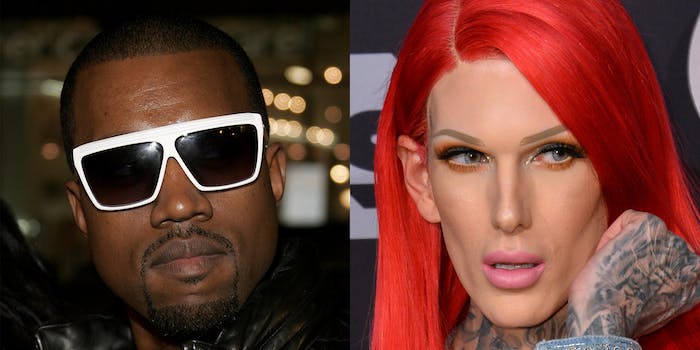 The TikTok user says her source is an L.A. lawyer.

On Tuesday night, Page Six first reported that Kim Kardashian and Kanye West were preparing for an imminent divorce. The reasons for the split varied depending on which side you asked, but could infidelity have played a role?

If you look at the Page Six story, cheating had nothing to do with the divorce of Kardashian and West, who have been married since 2014. One source said that Kardashian wants to push her prison reform campaign and that she’s “just had enough of” West’s antics while another source said that West, who first hinted that he was trying to divorce Kardashian back in July, “wants nothing to do with” Kardashian’s family or the exuberant lives they led on reality TV.

But one TikToker is alleging that West had been hooking up with a male beauty guru. Ava Louise, who has more than 500,000 followers on TikTok, first posted the rumor Monday night, and while she doesn’t name the beauty guru for fears of being sued, she implied who it was.

“i can’t say WHO cuz he’ll sue me hint hint but it’s part of the reason Kanye’s so religious now it’s his self hatred …. my source is legit I promiss,” Louise said.

In the comments, Louise said that her source was a lawyer friend in Los Angeles who met up with Kardashian months ago.

“MY FRIEND IS A BIG LAWYER IN LA AND MET WITH KIM MONTHSSSS AGOOOO AND WAS TOLD ALL OF THIS GIVEN EVIDENCE I WANT TO DROP RECEIPTS BUT CANT,” she wrote. “THIS IS ALLEGED – but yk my source is good I believe them.”

In another TikTok video, made a duet with herself to include more details about West’s alleged mindset.

“This is alleged, i was told by a source — a very good one….but it made so much sense to me,” she wrote. “Kanye’s *possible* internalized homophobia is so sad :/”

If you look through the comments, Louise likes comments from people who name the beauty guru in question. But in a third TikTok video, Louise created a duet with Patty Eminger, who named controversial guru Jeffree Star as the person West cheated on Kardashian with; Star has a history of threatening legal action. Eminger also sharing evidence of their alleged hookups, such as the fact that they both live in the same Wyoming gated community. On her side of the TikTok, she shared Twitter’s search page that showed West and Star’s names both trending together.

The rumors are entirely unverified, and while people on Twitter are being skeptical by a rumor sourced from TikTok, they’re also confounded by everything unfolding and turning to memes to express an assortment of feelings.

Star seemed to cheekily acknowledge the memes with a tweet on Wednesday morning that read, “Goooood morning everyone! How are ya?”

Update Jan. 8, 9:48am CT: Jeffree Star posted a video to YouTube addressing the allegations on Thursday afternoon. “Me and Kanye have never hung out, and this whole thing is really funny,” he said.

Update Jan. 11, 12:55pm CT: Louise is now saying that she made the entire rumor about West and Star up.

After another TikTok user shared audio from Louise in which she says she made up the rumor so people would start talking about her again. Louise eventually fessed up in a TikTok video posted late last week with the caption “i was gunna wait to expose myself but clout chasing locals I thought were my Friends wanna do it first 💅🏻 lame.”

“There is literally not one bit of truth to anything I have said,” she said in the audio recording. “I just tricked the entire world into talking about me again because I was on a lot of Adderall and bored.”

“And that’s on being an icon,” Louise added after the TikTok switches to a clip of her. “We all had fun though, didn’t we? You’re welcome for the memes.”