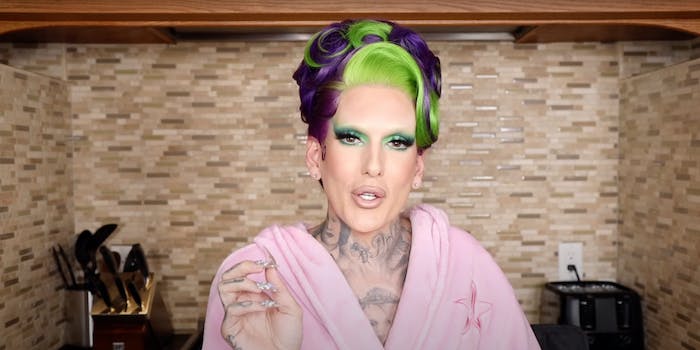 'I'm single, I'm not sleeping with anyone.'

Earlier this week, an unverified rumor that Kanye West and controversial beauty influencer Jeffree Star were sleeping together, which eventually led to West and Kim Kardashian divorcing, went viral across TikTok and Twitter. And while much of the conversation around the rumor involved confusion, skepticism, and disbelief, Star is now putting a rest to it all.

The rumors were first posted by TikTok user Ava Louise, who said she was informed by a lawyer friend about the affair. While she didn’t name Star in her TikTok videos, referring to him instead as a “male beauty guru,” she liked comments from others who guessed Star as the and made a duet with another TikTok user who laid out evidence that supported that Star was the male beauty guru in question; one instance was that both Star and West currently resided in Wyoming.

By Thursday, Star made a number of cheeky references to the rumors, including sharing memes and a viral clip of The Wendy Williams Show discussing the rumor.

But in a nearly 24-minute video posted to YouTube, Star expressed confusion about the rumor before shutting it down, calling it “the dumbest shit” that he’s ever read.

“So I guess some girl made up a whole lie on TikTok and it went ‘viral’ where she insinuates Kanye and Kim are getting divorced because a big male ‘beauty influencer’ is sleeping with him,” Starr explained. “I just woke up, I’m trying to live my life, and I’m like, ‘Huh?’ This is so weird. I have people texting me, news people, like, ‘What do you have to say about this?’ and I’m like, ‘About what? I’m single, I’m not sleeping with anyone.’”

Star also shared some of the memes that trended on Twitter to viewers, as he acknowledged he could see where some of his fans might potentially think the rumors are true; he mentioned West in his 2009 song “Bitch, Please!” and he once went to a West concert.

On his Twitter account, he ended up sharing many of the memes to poke fun at their absurdity.

“Let me just say this one time for any news outlet: I like very tall men, me and Kanye have never hung out, and this whole thing is really funny, so I guess if this is a start to my new year, Happy New Year,” he said.