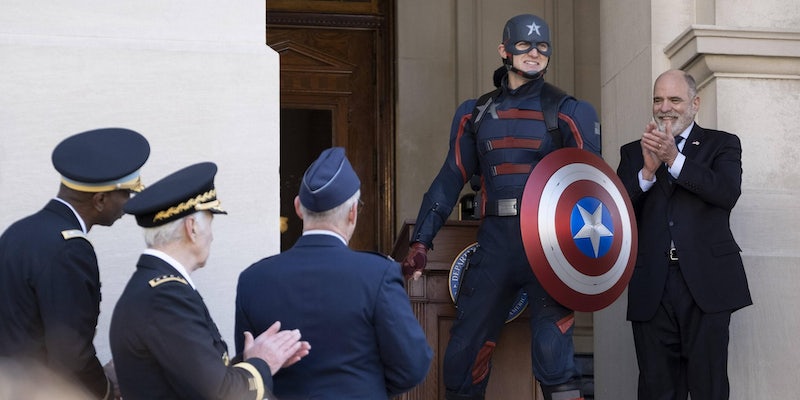 The Falcon and the Winter Soldier/Marvel

Why we love to hate the MCU’s new Captain America, John Walker

The Falcon and the Winter Soldier‘s new Captain America, John Walker, is so hateable that he became an overnight meme based on thirty seconds of screentime. Adapted from a long-running Marvel Comics character, we’re obviously meant to dislike him on sight. Not only is he a smarmy replacement for Steve Rogers, but he’s also a government-endorsed white guy who steals Sam Wilson’s rightful role. But rather than introducing him as an unmitigated asshole, episode two goes in a surprising direction. Wyatt Russell’s John Walker is, in fact, pretty charismatic.

Warning: This story includes spoilers for The Falcon and the Winter Soldier.

With John Walker, the US military gets to have the Captain America they always wanted. He’s superficially similar to Steve Rogers (a white, blond Army veteran with record-breaking combat skills) but unlike Steve, he’s happy to obey orders and act as a marketable symbol of American patriotism. We have no idea what Walker actually stands for on a personal level. Meanwhile Steve’s origin story was founded in his role as an underdog hero with a strict moral code, frequently rebelling against authority.

John Walker made his comic book debut as the villain Super-Patriot in Captain America #323, positioning himself as an alternative American superhero. He leads a patriotic rally in a stars-and-stripes costume, staging a fake battle where he defeats a squad of uniformed “Captain America supporters” to create an artificial rivalry. He’s basically a wrestling heel with nationalist sensibilities.

A few issues later, Steve Rogers steps down from his role as Captain America. In this 1987 storyline, we see characters debate various potential replacements (including Sam Wilson, who is rejected because “the country isn’t ready for a Black Captain America”) before choosing Walker as the new Cap. He’s already a well-known vigilante with a patriotic theme, and he gets partnered up with his own version of Bucky Barnes: Lemar Hoskins (aka Battlestar), who gets a similar sidekick role in The Falcon and the Winter Soldier.

Walker adopts the name U.S. Agent in later storylines, moving into a more heroic role as an ally to the Avengers. But while he isn’t a straight-up villain, his overall vibe is more violent and morally ambiguous than Steve Rogers. He just isn’t as well-suited to being Captain America, and he definitely has a less critical attitude to American patriotism. The Falcon and the Winter Soldier sets up a similar dynamic, putting Walker in direct opposition to Sam Wilson—and indeed to Isaiah Bradley, a Black supersoldier who was imprisoned by the government and erased from history.

Walker’s MCU introduction echoes Steve’s own origin story. After taking the supersoldier serum in WWII, Steve’s first mission was a glitzy propaganda tour selling war bonds. He only becomes an actual soldier after he abandons this job to save Bucky’s life in Europe. But in The Falcon and the Winter Soldier, we see the government reverse-engineer this success story. Walker is a decorated Army veteran with naturally impressive combat skills, and he’s happy to become a public figure. After being selected as Steve’s replacement, he embarks on a publicity tour including a big song-and-dance number on his old high school football field. He even has the same theme song as Steve Rogers, but he’s visibly more comfortable with the role.

Rather than being an airhead celebrity or a bloodthirsty patriot (a pair of obvious choices for character), Wyatt Russell plays Walker as a somewhat likeable figure. He’s supported by his longtime girlfriend and his sidekick Lemar Hoskins, and he sincerely wants to do a good job as the new Captain America. Adding insult to injury, he saves Sam and Bucky when they’re losing a fight against the Flag-Smashers—although, in the end, the Flag-Smashers beat Walker as well. He even asks Sam and Bucky to team up with him, but they turn down his offer because they disapprove of him taking Steve’s job. Like them, we hate John Walker more because of what he represents, not how he behaves.

Our first signs of Walker’s dark side arrive toward the end of the episode. After Bucky gets arrested for missing a court-mandated therapy session, Walker leverages his influence to get Bucky out of jail. This tells us two things about Walker’s attitude: He’s happy to throw his weight around as a celebrity, and he doesn’t really care about Bucky’s mental health. Walker just wants Bucky to help him catch the Flag-Smashers, viewing Bucky’s therapy appointments as an obstacle. Then outside the police station, Walker uses a siren to grab Sam’s attention—something that immediately puts us on edge, because Sam was just racially profiled by the police. And in the ensuing scene, Walker makes it clear that he has little respect for Sam and Bucky if they’re not going to help him.

John Walker wants to live up to Captain America’s legacy, but he approaches this from an achievement-oriented angle. He wants to be a hero, to look like a hero, and to complete the mission he’s given by his superiors. And when he can’t complete that mission, he starts to get antsy. This creates a clear contrast with Sam Wilson, who feels a deeper sense of responsibility toward Steve Rogers. Sam knew Steve as a friend, and understood his nuanced attitude to patriotism. On top of this, Isaiah Bradley just opened Sam’s eyes to the racism faced by the first Black Captain America. John Walker just doesn’t display that level of critical thinking toward the institution he represents. So he doesn’t need to be openly evil to be an appropriate antagonist here. He just needs to be a self-absorbed white guy.