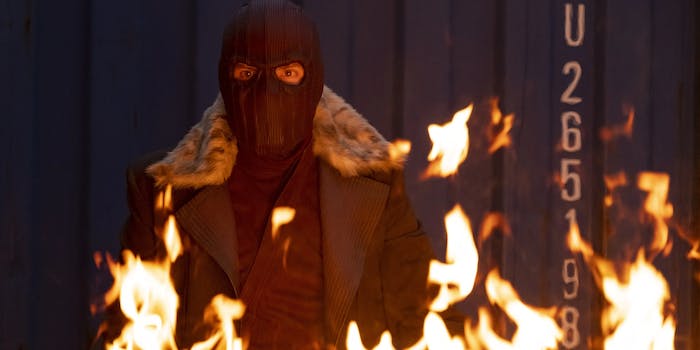 This week’s ‘Falcon and the Winter Soldier’ was written by the creator of ‘John Wick,’ and it shows

Episode 3 is a fantastical action-thriller, but does it really fit with the show's more political side?

This post includes spoilers for The Falcon and the Winter Soldier episode 3.

The Falcon and the Winter Soldier‘s third episode takes us to Madripoor, a fictional city-state in Southeast Asia. Featuring an unlikely team-up between Sam, Bucky, Sharon Carter (Emily VanCamp), and the supervillain Baron Zemo (Daniel Brühl), it’s a 45-minute action thriller where most of the emotional storytelling (such as it is) goes to our Flag-Smasher antagonist Karli Morgenthau. When you look at the credits, this format soon makes sense. The episode’s lead writer was Derek Kolstad, the screenwriter behind all three John Wick movies.

The basic premise for episode 3 is kind of ridiculous, highlighting the gap between the show’s serious side (commentary on racism, patriotism and social responsibility) and more cartoonish ideas like springing a supervillain from jail to track down a magic potion. As is often the case in the MCU, America represents the “real” world of relatable problems and banal locations, while non-Western settings are depicted as perilous, exotic and/or fantastical. With Wakanda, this theme was reframed in a positive light. For Madripoor, Sokovia and that terrible Avengers: Endgame scene in Japan—not to mention The Falcon and the Winter Soldier‘s Tunisia sequence —the results are rather more dubious.

Inspired by Singapore, the MCU’s version of Madripoor offers a familiar Hollywood caricature of organized crime, full of neon-hued nightclubs, showy costumes and ostentatious weaponry. While Zemo and Bucky can go undercover as themselves, Sam has to disguise himself as “a sophisticated, charming African rake named Conrad Mack”—a minor Marvel character, aka the Smiling Tiger. At the bar, he must prove himself by swallowing a shot glass of snake innards, Conrad Mack’s signature drink. However, this posturing is soon derailed by an unexpected phone call from Sam’s sister, who busts his secret identity and kicks off an action scene. This leads into a direct nod to John Wick, with nearby assassins receiving a text message announcing a bounty on someone’s head.

Featuring numerous fight scenes, a prison-break, an absurd undercover mission and a hero/villain team-up, this episode was straightforward action/adventure material. It requires us to suspend our disbelief, but that suspension is instinctively easy for superhero fans. The problem is, there’s a big shift in tone between this episode and the ones that came before.

The first two episodes touch upon real-world problems like PTSD, institutional racism, and a somewhat incoherent view of Sam as a relatable middle-class Avenger. (Is it believable for a celebrity superhero to have money troubles? Not really! He could get an endorsement deal in five minutes flat!) These serious storylines also require us to suspend our disbelief, but in a rather different way. As Charles Pulliam-Moore points out at io9, the show’s racial commentary is often simplistic and contrived, relying on Sam being implausibly naive. The more “realistic” the show attempts to be, the more we notice when things don’t make sense. Meanwhile, this week’s episode is pure fantasy. Focusing more on the Winter Soldier side of things, it’s a wildly fictionalized espionage thriller starring theatrical gangsters with silly nicknames. And while there’s nothing wrong with this kind of John Wick worldbuilding, The Falcon and the Winter Soldier now feels pretty uneven in tone.

WandaVision was perceived as a weird project by Marvel standards, but in some ways it’s actually simpler than The Falcon and the Winter Soldier. In WandaVision, we were introduced to a fairytale conceit built around one character’s emotional arc, culminating in a traditional Marvel finale. The Falcon and the Winter Soldier, however, is trying to keep several balls in the air at once.

Sam Wilson’s Captain America arc (and by extension John Walker’s role as the new Cap) is the most interesting element so far, even if the political storytelling is a little clumsy. But on top of this we also have Sam’s personal life, a continuation of the Winter Soldier story, updates from side-characters like Zemo and Sharon Carter, and an overly-ambitious subplot about the Blip causing economic upheaval across the globe. And in terms of actual screentime, this is an action-heavy show with a very basic, straightforward script. All of these elements are introduced in a very shallow manner.

So far, the show hasn’t offered much character development compared to WandaVision, Luke Cage, Daredevil, or Jessica Jones. Sam’s story grapples with his role as a Black superhero, but I wouldn’t say we’re given a deep, coherent understanding of his personality. And although Karli Morgenthau is supposedly a major player, her role can still be explained in a single sentence. Halfway through a six-episode series, The Falcon and the Winter Soldier keeps introducing new ideas without taking the time to focus on any single one.