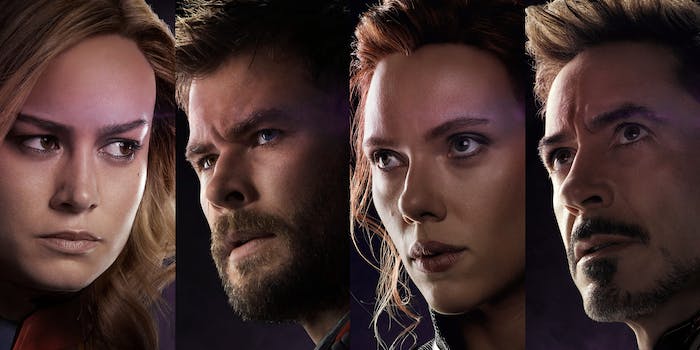 Despite the fact that Avengers: Endgame is being released in theaters exactly one month from today, we know relatively little about it apart from what we’ve been able to glean from a couple of trailers. But now Marvel Studios has dropped nearly three dozen new character posters, some of which reveal—for the first time—the fates of several characters in the Marvel Cinematic Universe.

Several Marvel actors posted their character posters online, but soon enough, Marvel grouped all 32 together for an eight-tweet thread. As a whole, the posters are pretty standard: it’s a close-up of the character’s face with the words “Avenge The Fallen” on the upper half of the poster. And even with that many posters, Marvel didn’t feature everyone, such as M’Baku, who survived Infinity War, and Maria Hill, who didn’t. (Not to mention the elephant in the room that is Thanos.)

But the color scheme is even more important: the posters of characters who are still alive at the end of Infinity War are in color while posters for the characters who died or have been turned to dust by Thanos are in black and white. (The most recent Endgame trailer used a similar color visualization.) Of the posters, 16 are in color, and 16 are in black and white. As Thanos would say, they’re perfectly balanced.

According to the Russo brothers, Tessa Thompson’s Valkyrie survived Infinity War, but apart from their word and a spoilery toy, fans didn’t have visual confirmation until now. Other minor characters like Pepper Potts, who Tony Stark has been recording messages for out in space, Happy Hogan, and Wong have all survived Thanos’ snap.

But Marvel’s biggest reveal? That Shuri, the genius behind many of Wakanda’s technological advancements and T’Challa’s younger sister, has apparently been turned to dust—which leaves Wakanda with no direct heir to the throne. The Russo brothers once said that her fate was a spoiler, but after all this time, having that reveal not only happen off-screen (for now) but on a character poster? Shuri deserved better.

But no matter how much the character posters have already started tugging at fans’ heartstrings, that hasn’t stopped them from creating their own “Avenge The Fallen” posters and making memes befitting of the Avengers.

I’m not sure why Marvel released this image of a grey background with text, but okay. #AvengersEndgame pic.twitter.com/LFazuPs4PP

Where is Beth the Waitress' #AvengersEndgame poster? Did she get snapped? Is she in Phase IV??? I have questions pic.twitter.com/6xxaOdUDnP

The surviving Avengers will avenge the fallen on April 26.