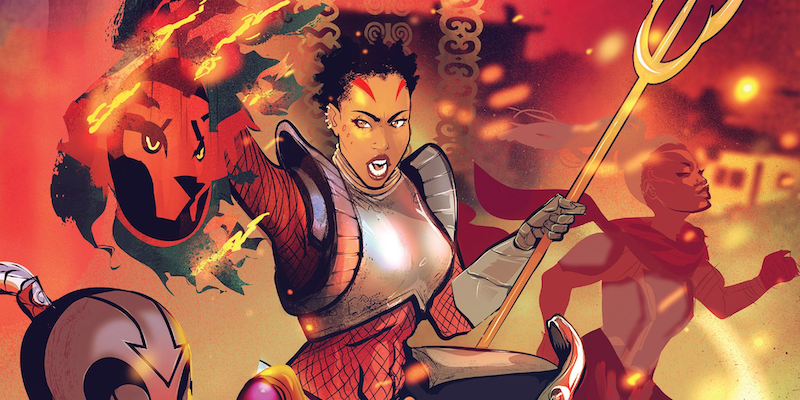 Photo via World of Wakanda #5/Marvel

Did Marvel erase a lesbian character’s sexuality for the ‘Black Panther’ movie?

Black Panther is one of the few Marvel comics with queer lead characters. Alongside King T’Challa of Wakanda, the story co-stars two women named Ayo and Aneka, who fell in love while serving among T’Challa’s bodyguards, the Dora Milaje.

Ayo and Aneka were compelling enough to warrant a spinoff comic written by feminist author Roxane Gay. But in the upcoming Black Panther movie, Ayo’s sexuality may have been erased.

According to reports from a press event at Marvel Studios, Ayo (Florence Kasumba) and another Dora Milaje (Okoye, played by Danai Gurira) share a flirtatious scene in Black Panther‘s early footage. Aneka doesn’t appear in the movie, but Vanity Fair felt the characters were similar enough to draw comparisons to their relationship.

Hollywood blockbusters are notoriously bad at including LGBT characters, so many Marvel fans were overjoyed to hear about Ayo and Okoye. But Marvel soon corrected this assumption, clarifying that the characters aren’t in a romantic relationship. This didn’t go down well in Black Panther fandom, giving rise to the hashtag #LetAyoHaveAGirlfriend.

marvel: we want to be faithful to the source material
ayo: canonically gay
marvel: i cant read suddenly i dont know#LetAyoHaveAGirlfriend

In fairness to Marvel, they’re just trying to avoid becoming the next Beauty and the Beast, which kicked off an international controversy by promoting an “exclusively gay moment” that arguably didn’t exist. This kind of speculation is inevitable when you invite journalists to cover an unfinished film.

On the other hand, fans have waited about 1,000 years for Marvel Studios to deliver LGBT representation on the big screen. So far there’s one forgettable gay supporting character in Agents of S.H.I.E.L.D., and a handful of queer characters in Netflix‘s adult-rated Jessica Jones. Meanwhile, in the movies, we’re drowning in an ocean of white, heterosexual men played by actors named Chris.

In 2015, producer Kevin Feige told Slashfilm, “There is no reason why [LGBT characters] can’t happen anytime soon.” He praised the progressive nature of recent Marvel comics, saying, “I’d love to find an organic, meaningful and natural way for that to happen.”

Ayo definitely fits that criteria. She’s canonically gay, and despite being an obscure new character, her comic World of Wakanda is outselling several well-known Marvel titles including Ghost Rider, Power Man and Iron Fist, and each of the solo Guardians of the Galaxy comics. There’s definitely an audience for LGBT characters in Black Panther, and they’re only going to get louder.