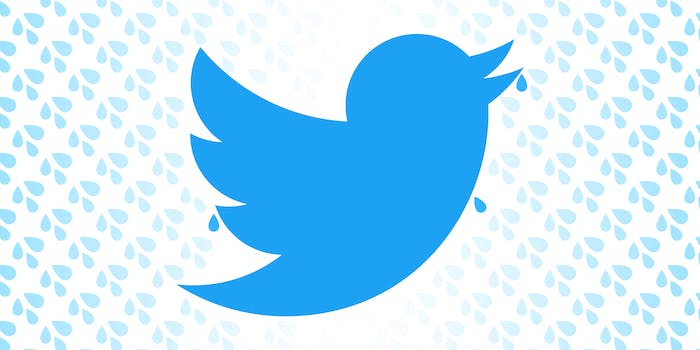 It's your public Twitter, and you'll be as thirsty as you want.

“I’ve BEEN saying this!” Chapo Trap House’s Will Menaker tweeted, while Will and Grace’s Debra Messing stressed “This. Is. Everything.” 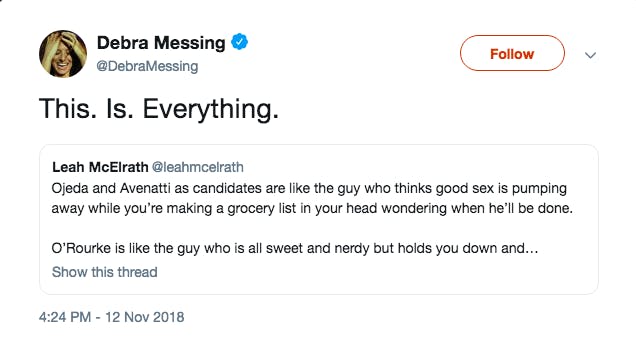 The Beto Sex Tweet’s sheer explicit language made it a viral sensation. Merely uttering the tweet’s name brought out strange reactions, from disgust to desire to utter indifference.

In 2001 Al Gore grew a beard to recover from the trauma of the Florida recount.

In 2018 Ted Cruz grew a beard to recover from the trauma of the Beto sex tweet.

The wife put a Beto sign on our third floor apartment balcony. We have seen the sex tweet.

that "Beto sex tweet" accurately described and distilled my feelings towards Beto, though.

HuffPost’s Ashley Feinberg, meanwhile, carried out a much more pressing journalistic investigation: Had Beto himself seen the tweet? She tweeted at O’Rourke twice to confirm whether or not he saw it. As of yet, no one knows.

@BetoORourke lmk when you see it

The Beto Sex Tweet may be a lot to process if you’ve never had a sexual fantasy about Beto O’Rourke cramping your calves before. But the fact that Twitter is talking about the tweet isn’t all that shocking.

Women have shaken the online editorial world by announcing yes, they fuck. Whether that’s trans women, queer women, sex workers, dommes, or just women owning up to the fact that they experience orgasms, writers have introduced readers to new ways of thinking about their bodies. This isn’t a new experience: for years, female sexuality writers have dominated online writing. But a generation that grew up on this kind of media is finally coming of age, and it’s thinking about sex in a way that centers queer and femme gazes.

Twitter has developed a language around horniness that makes thirst less objectifying, too. Suggestive photos are just “thirst traps.” Obsessing over your gym crush’s cute bod is just “thirst posting.” And creating a private Twitter account for talking about sex is just sharing an “AD,” or “after dark.” Putting online horniness into a coded language makes it feel like a shared experience, making it less taboo to express one’s sexuality on the internet.

The very nature of the meme—a powerful, masculine villain becoming a buff, domineering woman—fascinated users with transformation and feminization fetishes. Others, especially queer women, fell in love with Bowsette for her non-normative appearance. It took weeks for the meme to die down in popularity.

#Bowsette VOTES ARE IN! 3 won by a landslide. 60+ coming second was 2, at 30+ Didn't get to finish it, but here is some simple colors for presentation. We'll see what happenes tomorrow. Some have been requesting #Booette T_T… pic.twitter.com/sCDMyK3xLu

Case in point, just look at Wall Street Journal’s Elliot Kaufman, who wrote a bizarrely thirsty tweet negging a young woman on the subway who didn’t know about Winston Churchill. Kaufman quickly went viral for calling her an “attractive 22-year-old girl” and tweeting that he has “been waiting for this moment my entire life” to talk to someone like her. Months later, Kaufman is the poster child for thirst posting recklessly on the internet.

Attractive 22-yo girl on the subway: *minding her own business*

Me: *minding my own business*

Sneaky’s modeling has earned quite a sizable following from both men and women, but the two genders’ responses are vastly different. More often than not, men thirst post over Sneaky abrasively. They post memes involving boners, question their sexuality, or joke that they’re feeling turned on.

While some women post similar memes, most respond in a much more polite and affirming way. These range from cute response GIFs celebrating his crossplay to tweets honoring the hard work that Sneaky and Lynn put into his modeling. Women are more likely to call Sneaky “cute” or “beautiful,” too.

In fact, it can be hard to tell whether women are thirsty for Sneaky or just praising him. That’s exactly the point. The ambiguity means women that are thirst posting for Sneaky blend right in with everyone else, and they’re less likely to be seen as creepy or aggressive. They skirt the line between “thirsty” and “playful” extremely well.

H…how am I suppose to continue with my day after seeing this? pic.twitter.com/bzm8yHMagf

In 2018, it’s okay to be thirsty on the internet. We’ve learned to embrace it. But thirst posting is an art form. You can’t just tweet about the “attractive 22-year-old girl” on the subway. Nor can you jump into an esports player’s Twitter mentions and tell him that he’s giving you a boner. That’s just creepy and weird. You have to consider who’s reading your feed, how it could impact you, and whether you’re grossing out the person on the other side.

With great horniness comes great responsibilities, as the late Stan Lee would say. Women and queer folks seem to have it down. Straight men, on the other hand, could use some time to refine their skills before 2019.