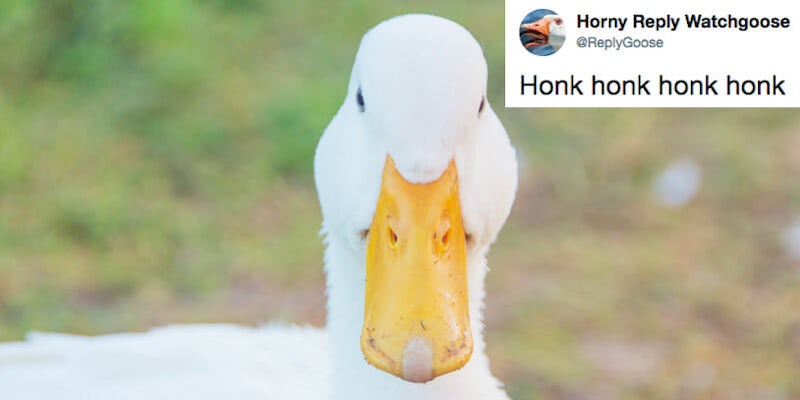 Can't behave yourself on Twitter? That'll be a honk.

Although it’s a well-regarded fact that Twitter is 100 percent free—as the running meme joke goes—a much less ballyhooed fact is that is that Twitter is also 100 percent public. Some people opt to protect their accounts, but honestly, that’s pointless. You may as well just go on Facebook. Plus, with the convenience of screengrabs, nothing anyone says on social media truly has any guarantee of privacy. As a wise man once said, “You can’t take something off the internet, it’s like trying to take pee out of a swimming pool. Once it’s in there, it’s in there.”

When you factor in Twitter’s continued refusal to ban literal Nazis and other problematic users, the outcome has resulted in call-out culture. Say something racist on the internet and there’s a fair chance you might get outed for it by accounts such as Racist Pets on Racism WatchDog. (Although the latter recently came under fire for inadvertently posting a racist tweet, which proves that not even call out accounts are safe from being called out on.)

The account surfaced in June, and it has already amassed over 12,000 followers, thanks to hilariously savage call-outs like the following.

And so far the strategy seems to be working! That is if the amount of since-deleted pervy tweets are any indication.

Anyone who deletes a tweet after a honk is a coward

The Watchgoose’s honks aren’t exclusively directed at replies, and some tweets are more tongue-in-cheek than others.

I do what I want https://t.co/q0vCElnzWH

If you're trying to get a honk I'm not gonna honk

The account is the brainchild of 19-year-old Californian Veronica J., who goes by @VR0NLINE on Twitter. She initially came up with the idea as a joke, but once she tweeted the idea to her followers, it quickly became apparent that she was onto something.

As for why it’s a goose (and she makes sure to specify that the goose is, in fact, a girl), Veronica says that she and her friends brainstormed a few ideas before arriving on that particular animal. She didn’t want it to be a dog because she thought it would be too derivative from the Racism WatchDog, and even considered making it a penguin, but didn’t think the noise a penguin made was “ubiquitous enough to be really iconic.”

But once someone threw out the idea of a goose, based on another friend’s viral tweet, it stuck.

“If I want the goose to do one thing it’s to make men realize that tweeting at an absolute stranger to tell them how they’re sexually attracted to them is kind of weird,” she concluded.