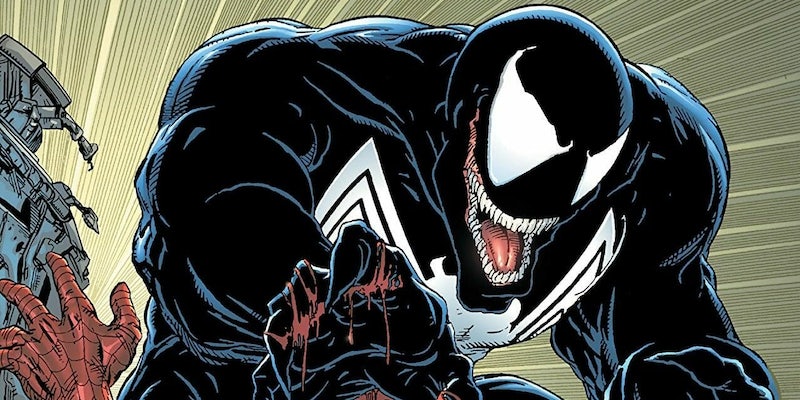 The new Venom movie arrives at a perfect time for monster fuckers. The last few years saw an unexpected convergence between sincere monster erotica (hello to Guillermo del Toro and Amazon’s vast platform of werewolf ebooks) and absurdist memes about wanting to bang Pennywise the Clown. Into this landscape arrived a sweaty Tom Hardy, readily engulfed by a ravenous beast with a gaping, slavering mouth and a prehensile tongue.

Venom started off as a Spider-Man villain—an alien who disguises itself as a new Spidey suit and bonds with Peter Parker, giving him extra powers. Naturally, there’s a catch. The Venom symbiote begins to control Peter’s body without his knowledge until Peter figures it out and escapes.

This set the tone for Venom’s subsequent appearances, which often function as Jekyll & Hyde-style psychological thrillers. Numerous characters have shared their body with Venom in exchange for inhuman power, and the differences lie in how each character reacts. Peter Parker sees Venom as a horrifying invasive force, while others like Flash Thompson (a black ops agent) and Lee Price (a criminal villain) seek to control Venom’s power for their own ends. Eddie Brock is the best-known Venom host, forming a complex relationship with the symbiote. In some storylines, it’s explicitly romantic.

Last year’s Venom series attracted attention for its romantic overtones, but before I get into that, let’s go back to the start. After Peter Parker escaped the Venom symbiote in the mid-1980s, Eddie Brock became its second host. They bonded in more ways than one. Venom was obsessed with Spidey because Peter rejected him, while Eddie Brock was a disgraced journalist who blamed Spider-Man for the death of his career. They found each other at a low point in each of their lives and joined forces to get revenge on Spider-Man. Eddie’s Venom soon became a hit character, prompting Marvel to publish a solo series that revamped him as an antihero: Venom: Lethal Protector.

The sexy subtext of Marvel’s Venom

Lethal Protector loosely influenced the new movie, beginning with Eddie moving to San Francisco to have a clean break from Spider-Man. There, he and Venom use their shared powers for vigilante justice, balancing Eddie’s desire to do good with Venom’s manic lust for violence. This comic cemented the idea of Eddie as Venom’s true partner, contrasting with innocent victims like Peter Parker, and villains who want to exploit Venom’s powers for maximum carnage. Eddie is conflicted about Venom’s bloodthirsty nature, yet he’s addictively compelled to stay on as the symbiote’s host, referring to Venom as his “other.” His significant other; his other half.

The Venom comics are a handy illustration of how horniness is in the eye of the beholder. Venom and his fellow symbiotes are generally portrayed as straightforward monster villains, and they’re definitely not “sexy” by typical standards. However, there’s an undeniable link between body horror and sexuality, as you’ll know from the obvious phallic imagery of the Alien movies. Some comics acknowledge this pretty blatantly, like these panels with Venom and Hawkeye:

This brings us back to the 2017 run of Venom, which combined the best of symbiote-related body horror with a thoughtful romance storyline.

We begin with Eddie and Venom reunited after a long separation—a recurring theme in Venom comics because other characters often want to use the symbiote for their own purposes. The 1994 miniseries Separation Anxiety explored a similar idea, with the symbiote pining for Eddie while Eddie examined the horrors he committed while under its influence. That story ended with them voluntarily bonding once more, and the 2017 Venom digs deeper into this dynamic, portraying it as a passionately co-dependent relationship.

Eddie and Venom agree that they’re only truly whole when they’re together, and the first issue opens with a romantic monologue: “The thing about love is that it’s not gentle or soft, not at all. Love is strength, and full of terrible purpose. Love is power, and it will never be done with you. It consumes you.” Artist Tradd Moore depicts Eddie with the bulging muscles and soft lips of a Tom of Finland drawing, constantly speaking with Venom at the back of his mind.

There’s a surprising level of tenderness between the two characters, and the comic’s main tension feels a lot like a marriage drama, where conflict stems from jealousy or disagreements over joint decisions. You can already see a marked difference from something like the 2009 storyline Dark Origins, where Venom is portrayed as a malevolent influence:

By 2017, Venom sees Eddie as a positive influence on him. And, in his own twisted way, the symbiote is protective. He repeatedly saves Eddie’s life and tries to abide by his moral code, and while their partnership isn’t exactly healthy, it’s different from the troubled allegiance of their early “we both hate Spider-Man” days. The series ends with a pregnancy storyline, where Venom becomes pregnant while still inhabiting Eddie’s body.

Venom has actually had children before (in fact, several of them show up in the original Lethal Protector comics), but this time it’s different because the symbiote genuinely cares about Eddie’s reaction. By keeping the pregnancy a secret, Venom commits a personal betrayal against Eddie—but it turns out OK in the end. Venom admits that he was just scared, and Eddie risks his life to protect the symbiote while he’s giving birth.

Sony’s Venom actually lives up to this standard of romantic drama. Along with various interviews extolling the virtues of Venom’s tongue, Venom and Eddie literally make out on-screen (kinda), and director Ruben Fleischer is aware of the romantic nature of recent Venom comics. Plus, there’s the inevitable Tom Hardy chaos factor. The film wins because it sneaks psychosexual weirdness into the final cut—and understands what makes Venom interesting.