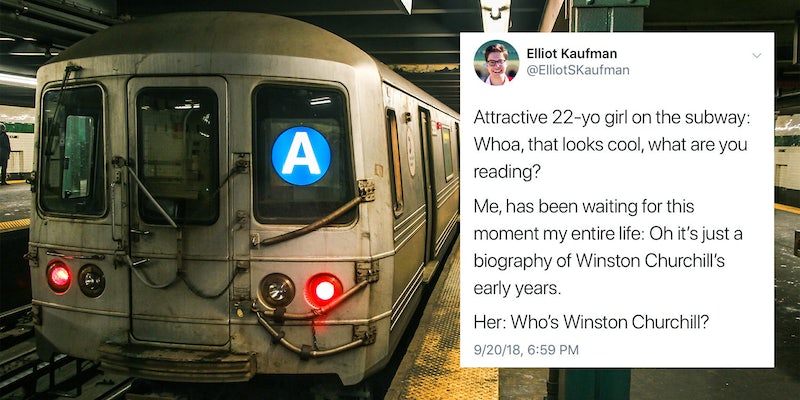 He's been waiting for this moment his entire life.

Picture this: You’re Elliot Kaufman, a self-identified conservative with bylines at the Wall Street Journal and the National Review. For some reason, this doesn’t get you laid, so instead, you find a new solution: Negging random women on the subway.

Kaufman went viral this week after he tweeted an unreasonably thirsty conversation between himself and what he describes as an “attractive 22-year-old girl” on the New York City subway. After the woman apparently asked Kaufman what he was reading, he immediately lit up, saying that he “has been waiting for this moment my entire life.” But as soon as he explained that he was reading a biography on Winston Churchill, his heart was crushed after learning that the woman on the train didn’t know who Churchill was.

In response, he turned to Twitter with a now-deleted tweet in a desperate attempt to make fun of the woman who broke his heart.

This isn’t Kaufman’s first thirsty tweet, for the record. He has a pinned tweet inviting “anyone who sees this” to “DM me to get lunch/dinner/drinks,” and there’s also one where he tweets about thinking of “sex without the law.” There’s even a hidden gem in his timeline about eating an entire box filled with tenders and popcorn chicken from KFC on the subway. Quite the catch, ladies.

There’s something about Kaufman’s desperation, his incredibly high standards, and his weirdly off-putting condescension that just screams avoid at all costs. It’s so bad, it’s good. And thus a meme was born about the “attractive 22-year-old girl on the subway” that totally exists and isn’t made up.

Attractive 22-yo girl on the subway: Whoa, that looks cool, what are you reading?

Her: Does it use colourLok® Technology for 60% bolder blacks?

attractive 22-yo girl on the subway: (in a thick boston accent) ey pal you got a smoke?
me, has been waiting for this moment my entire life: anything for a broad like ya self. you from this pawtta town? lemme buy ya dinna
her: (has vanished with my wallet & keys)
me: not again!!!

Attractive 22-yo girl on the subway: Whoa, Churchill was a white supremacist

Me, has been waiting for this moment my entire life: yup.

Hi, it’s me, the attractive girl who says “Whoa, that looks cool, what are you reading?” to men I don’t know on the subway. I also say “Hey, by the way, I’m 22 years old.” pic.twitter.com/2iV6xcaFg9

— addicted to deleting my own tweets (@GraceSpelman) September 25, 2018

Twitter users even came up with some more realistic renditions of what happens on the subway when two people are talking to each other.

Attractive 22-yo girl on the subway:

Me, thousands of miles away: there should be a Book-It! program for adults

Attractive 22-yo girl on the subway: Whoa, are you eating beans?

For the record, Kaufman isn’t a fan of the tweets.

“Among people who take their cues from rich kid socialists,” Kaufman, a Stanford alumnus, replied.