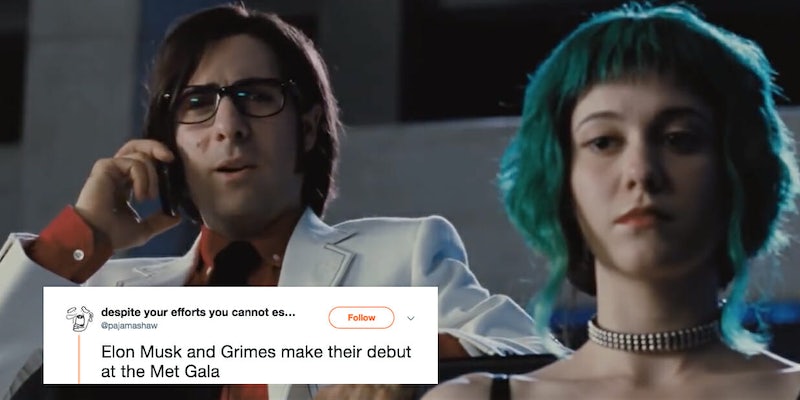 Grimes even responded to one meme.

Elon Musk, an Iron Man who built a regular car instead of a flying suit, and Grimes, an avant-garde musical artist, are officially dating. Congratulations? Ever since the unlikely couple made their public debut at the swanky Met Gala on Monday, the internet has been meme-ing the heck out of them.

Grimes, real name Claire Boucher, is one of the last cool celebrities, and it pained some to see her dating a tech-bro billionaire with some questionable ideas about the safety of his workers.

Elon Musk dating Grimes is all the proof you need to know we’re in a simulation.

Plus, it was just funny to extrapolate from their public personas and imagine what their relationship must be like.

Don’t they look cute together?

Elon Musk and Grimes make their debut at the Met Gala pic.twitter.com/plAvt2xvc6

Well, that’s Gideon Graves and Ramona Flowers from Scott Pilgrim vs. the World, which seems just a little bit on the nose. Let’s move on, shall we?

When they’re not posting parody couple photos, the Grusk haters are coming up with ridiculous “couple names” for the new duo. I don’t think “Grusk” is going to stick, but what about these?

How do people not know of Grimes before this? Anyways, hopefully they name their child after their couple name, Gron. Gron.GRON.

Take your pick. I like ‘Description of an Old Basement’ personally, but there are so many terrible options to choose from!

Musk was already a favorite target of memers, whether they were making fun of his futurism or calling him “Elongated Muskrat.” Now that he’s in elongated muskrat love with a well-liked celebrity, the meme potential is through the roof.

As the cool kids of the internet fall into despair that the billionaire class has seemingly tainted another one of their heroes, I’ll leave you with this footage that’s been going around of Musk and Grimes at home.

You think it’s a joke, but no. This is real life. Grimes responded to the tweet on Wednesday afternoon with the caption, “accurate.”

At least she’s having fun with the internet’s reaction to her relationship.

Musk also responded to a Fifth Element meme about the couple’s relationship on Twitter Wednesday night.

His reply is a reference to a pun about an AI thought experiment, Roko’s Basilisk, which launched the relationship. So they are that kind of couple on Twitter.